A 2000 km Maritime Litany Dedicated to St. John of Kronstadt 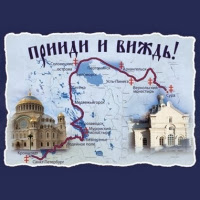 Between June 1-14 in 2013, with the blessing of Patriarch Kyrill of Moscow, the first maritime procession was held in honor of St. John of Kronstadt.
The procession started from Kronstadt and ended in Sura, a small region near Arkhangelsk in the depths of Russia. This is the region where the great Saint of Orthodoxy, John of Kronstadt, was born in 1829. 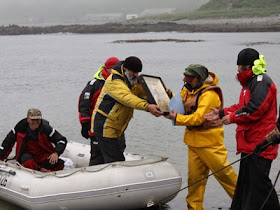 The purpose of the procession is to revitalize spiritual life in this isolated region and enhance economically the female Monastery of Saint John the Theologian in Sura, which was built by St. John of Kronstadt in the place he was born. 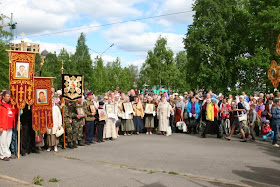 Men who participated crossed by boat and walked the distance of 2000 km. The women went by land and used the boat to reach the spot in Solovets, from where they returned to St. Petersburg. It was a route St. John did once a year when he would visit his homeland. At that time to cross this route was very dangerous and extremely arduous. The Saint did the route in the last years of his life via a steamer, forming an area in Sura specifically for the arrival of the Saint. The processional route passed through areas the Saint had visited. 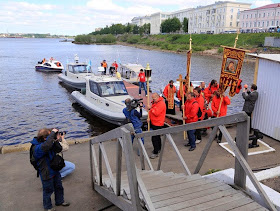 It started from the Church of Saint Nicholas in Kronstadt and passed in turn from Lake Ladoga (the Monastery of Saint Alexander of Svir), Lake Onegka, then crossed the channel of the Baltic Sea - White Sea in order to reach the Monastery of Solovets. From there it went to Arkhangelsk to the Artemievo-Verkola Monastery, and through the Dvina River it arrived in Sura. 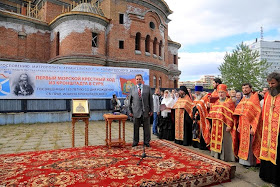 The project accomplished by twenty men was eventually much more difficult than anticipated, but through their prayers to Saint John they managed to carry out the project.
Everywhere they went they were well received by local officials and the people, everyone hoping to revitalize the tradition of the Russian Church.
Source: Translated by John Sanidopoulos.