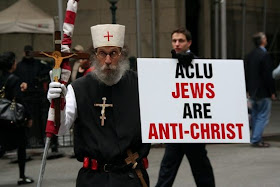 Though I have never posted anything specifically on Brother Nathaniel on this website, I have received dozens of emails over the past few years asking about him. I informed people of what I knew about him from those who personally have known him, all of which were very disturbing things.
Among the things I was informed about and have now been documented online in various sources, is that he is a man with mental problems (pleasant on his medication though very unpleasant when not) who has caused enough disturbances in a few monasteries in America so that he was kicked out of all of them, at least once by police. He is not and never was a monk. He was a novice in an Old Calendarist monastery in Colorado, but was kicked out of there too. He claims to be a legitimate monk from a legitimate Orthodox monastery, but this is not true. He is in fact a showman who likes to be the center of attention with a persecution complex, though he is well off financially after being successful in business. He is fixated on his Jewish heritage, a sort of love/hate relationship, and obsessed with conspiracy theories that more often than not come out as anti-semitic poisonous rants. He also wears a white skuphos which is only reserved for Metropolitans in the Slavic churches, and a pectoral cross which is forbidden to novices.
In light of these things and his dozens of disturbing videos online, which many Orthodox devour to their own demise, the following official statement by the Synod of Bishops of the Russian Orthodox Church Outside of Russia is most welcome. May it help lead him and his admirers to repentance.
The Synod of Bishops of the Russian Orthodox Church Outside of Russia has recently received repeated complaints about the activities of and statements made by a certain Nathanael (Kapner), who lives on the territory of the Western American Diocese, but has no relation to it.
The clergymen and laity of the Russian Church Abroad are hereby informed that the actions of Nathanael (Kapner) do not have the blessing of the Synod of Bishops.
Profoundly saddened by the state of his soul, we call upon Nathanael (Kapner) to refrain from posting on the Internet, to a life of repentance of peace in Christ, “where there is neither Greek nor Jew, circumcision nor uncircumcision, Barbarian, Scythian, bond nor free: but Christ is all, and in all” (Colossians 3:11).
+KYRILL,
Archbishop of Western America and San Francisco
Secretary of the Synod of Bishops.
July 17, 2013
Source
John at 10:18:00 AM
Share
‹
›
Home
View web version