Was Saint Nicholas at the First Ecumenical Synod? 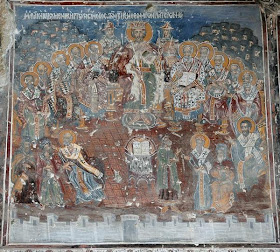 By John Sanidopoulos
It was fairly common in the medieval West, if a twin brother and sister were born, the parents would name the boy Nicholas and the girl Katherine. This was because Sts. Nicholas of Myra and Katherine of Alexandria were perhaps the two most popular saints of medieval times, whose devotion spread all over the world through pilgrimage and wonderworking relics. Despite their popularity, we have very little if any early testimonies to the details of their lives.
Regarding the earliest sources for St. Nicholas, who reposed in the mid-fourth century, the first hagiography we have of him comes almost 500 years later and dates from the early to mid-ninth century, by an otherwise unknown author named Michael the Archimandrite. In this he writes to one named Leo: "Until now the spiritual program of this illustrious pastor was unknown to many people, as you yourself suppose, although some had knowledge of his grace from the lone Acts dedicated to him." From this source, and perhaps others, St. Methodios, Patriarch of Constantinople, towards the middle of the ninth century, wrote a Life of the Saint in which he declares that "up to the present the life of the distinguished shepherd has been unknown to the majority of the faithful." From the text of St. Methodios, we have the first Latin translation of the Life of St. Nicholas from John the Deacon. Then we have the early tenth century Greek text of St. Symeon the Translator, who used all the available sources known to him to compile his Life.
Though the hagiographies of St. Nicholas are late, few would doubt the historicity of St. Nicholas. Prior to these sources, St. Nicholas is often referred to and churches were dedicated to him, even in Constantinople, and it was very common for his time to not write down detailed early biographies, which actually just started around his time. Even someone as well-known as Alexander the Great did not have any detail of his life written until about 500 years after his death.
The problems arise, however, when we examine the details. For example, we know that certain details from the hagiography of the lesser known St. Nicholas of Zion, also from Myra, and who flourished in the early sixth century, were confused by later sources in the hagiography of St. Nicholas of Myra. Also, because the earliest sources for St. Nicholas of Myra do not cite their sources, it becomes very difficult to scientifically distinguish fact from fiction.
The value of the early Greek sources by Michael the Archimandrite, Methodios of Constantinople, and Symeon the Translator, is that they tend to have agreement on many of the details of the life of St. Nicholas. A problem arises however when we examine the Latin translation of John the Deacon, which was supposed to be a translation of St. Methodios' text. What we find in this "translation" however are certain interpolations that are not mentioned in the early Greek sources, among which is the often cited detail that St. Nicholas attended the First Ecumenical Synod, called by Emperor Constantine the Great to deal with the Arian heresy, in 325 A.D. To confirm this, The Golden Legend, compiled by Archbishop Jacobus de Voragine in the thirteenth century, says of the sources for the life of St. Nicholas, "the doctors of Greece write his legend, and some others say that Methodios the patriarch wrote it in Greek, and John the deacon translated it into Latin and adjusted thereto many things." Some say that John the Deacon was a monk from Studite Monastery in Constantinople, but in fact he was a deacon from Naples.
Now it would make sense for St. Nicholas to have attended the First Ecumenical Synod, since according to his hagiography he was Archbishop of Myra at the time. However, the earliest lists of those who attended the Synod in Nicea never mention St. Nicholas among the attendees. This doesn't mean necessarily he was not there, since we do not have any actual minutes from this Synod, but it raises suspicion. To be noted, this list is known from eleven medieval copies. Only three of them mention Nicholas, but one of these is considered to be among the best copies. This could mean that his name was either added to the list, or removed. 318 bishops are said to have attended this Synod according to Athanasius the Great, but the lists mention much fewer, though it is speculated that Athanasius made this number up for symbolic reasons (cf. Gen. 14:14). Others speculate the reason St. Nicholas is missing from the majority of lists is because of a certain incident that may have prevented his name being mentioned. 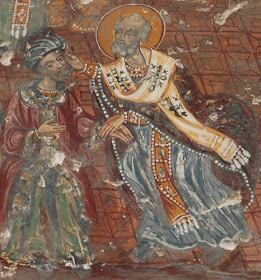 The incident that may have prevented St. Nicholas from being listed among the Fathers who attended the Nicene Ecumenical Synod of 325 is mentioned to us for the first time among the interpolations of John the Deacon. He details that out of his great zeal for the truth, St. Nicholas struck the heretic Arius with his hand because he could not endure his blasphemies. John the Deacon writes: "Animated like the Prophet Elias with zeal for God, he put the heretic Arius to shame at the Synod not only by word but also by deed, smiting him on the cheek." For this act he was removed from the Synod by the Emperor, and because such an act is forbidden to clergy, he was also removed from his archiepiscopal duties. Meanwhile, he was sent to prison, during which time the Lord Jesus Christ Himself and the Most Holy Theotokos appeared to him and several of the hierarchs and revealed their approval of Nicholas by giving back the emblems of his hierarchical duties. A later tradition states that the reason St. Nicholas often is seen in his icons without an episcopal mitre is because of this incident.
We can only speculate if this account is truly historical or not. Some may also choose to believe that this account is allegorical based on other incidents mentioned in the Life of St. Nicholas. For example, when one reads the Life of St. Nicholas, the number three often comes up. It seems that it is no coincidence that he offered dowries to three young women, freed three generals who were about to be put to death, and saved three other people who were condemned to death. It is speculated that this is done purposefully in order to symbolize the Holy Trinity, the doctrine which he is said to have been a zealous defender of. St. Methodios writes of Nicholas' zeal for Orthodoxy, saying: "Thanks to his teaching the metropolis of Myra alone was untouched by the filth of the Arian heresy, which it firmly rejected as death-dealing poison." Even the Epistle reading traditionally appointed for his feast comes from the last chapter of Hebrews, in the course of which come these words: "Jesus Christ is the same yesterday and today and forever. Do not be led away by diverse and strange teachings...." We also read about the zeal of St. Nicholas against paganism in St. Symeon the Translator, where he mentions that after being released from prison during the persecution of Diocletian with the toleration of Constantine, Nicholas returned to Myra determined to wipe out paganism. He writes:

Now when he discovered that many of the shrines of the idols still existed and that the great broods of demons dwelt therein and were disturbing some of the citizens of Myra, incensed in mind he set out with force and holy zeal to rage through the whole infested region. Wherever he found such a shrine, he tore it down, reducing it to dust. In this way he drove the mass of demons away and brought about tranquillity for the folk to enjoy. Understand, when the Saint as adversary of the Evil Spirit thus waged war, it was the inspiration of the Supreme Being and more divine Intelligence that effected these results for him. Eventually he did not even abstain from the temple of Artemis, but attacked it also, doing with it as he had done with the others.

These details can both give credibility to the historical account of St. Nicholas' actions at the First Ecumenical Synod, and it can also lend credibility to the speculation that the interpolation of John the Deacon was an allegorical account to reveal that Nicholas was a zealous champion of Orthodox Christianity. Ultimately it is up to the reader to decide. Whether St. Nicholas did or didn't slap Arius, we can be assured that Jolly St. Nick did rap the unbelieving psychologist with his cane according to the story of Miracle on 34th Street.
John at 10:45:00 AM
Share
‹
›
Home
View web version