The Cave of Saint Nicholas in Beit Jala 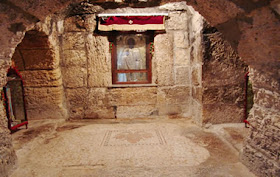 When St. Nicholas visited Palestine he is believed to have lived for three to four years in a small cave in Beit Jala. St. Nicholas Greek Orthodox Church is on the site of the cave. In Beit Jala today there are innumerable stories about Saint Nicholas.
Fr. George Shawan, Beit Jala's senior Orthodox priest says, "For us he is not Santa Claus, but like our great great grandfather. We feel we know him personally. In the year 305, several monks from Anatolia in Asia Minor came here and established a small monastery with a church named in honor of the Great Martyr George. This was before St. Savva’s Monastery was founded in the desert east of Bethlehem on the Kidron Gorge near the Dead Sea. The monks in Beit Jala had a few caves and several houses. In the years 312-315, St. Nicholas was here. He came as a pilgrim to visit shrines in the Holy Land. A text written in his own hand is still in the care of the Patriarchate in Jerusalem. It was in his prayers that St. Nicholas heard the Holy Spirit call him back to Asia Minor, to Myra, where soon after his return — in 317 — he was consecrated bishop." 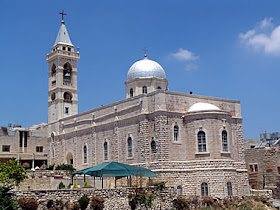 Protector of Beit Jala
When raiding invaders surrounded Beit Jala, attacking it, the townsfolk bravely defended the city. Every time the attackers tried to take the town an Old Man with a lance or spear stopped them in their tracks. It seemed as if even the olive tree branches were beating the invaders back. The raiders later told that the townspeople's bullets had little effect, it was the Old Man who never allowed them to move forward and take the town. An so it was Saint Nicholas who saved Beit Jala.
This protection was repeated again during World War I and II, when it is said that St. Nicholas stretched out over the village, protecting the people.
Locals also report that he was seen with hands outstretched, catching bombs aimed at Beit Jala following the State of Israel's 1948 declaration of independence. Many residents took refuge in the church and once again St. Nicholas was seen to block bombs from destroying the church, protecting the people. One resident says, "No bombs reached Beit Jala. Only the tower of the St. Nicholas Church was damaged. We know it was St. Nicholas that saved Beit Jala from any problems."
Gene Stoltzfus, founder of Christian Peacemaker Teams, reported, "I first really became aware of the power of Santa and St. Nicholas during the 1990s, when I regularly visited Palestine where Muslims, Jews and Christians alike used my appearance [he looked like Santa Claus] as a conversation starter. When the second intifada (uprising) broke out in 2000 there were violent exchanges between Israelis and Christian villages like Beit Jala, near Bethlehem. In Beit Jala I was seriously introduced to St. Nicholas, their patron saint who gave special protection to the villagers since the 4th century. The story is that St. Nicholas was a pilgrim to Beit Jala in the years 312-315 and he lived in buildings and caves built by monks a century earlier. The people of Beit Jala told me story after story about how St Nicholas had saved their village over the centuries up to and including modern intifadas." 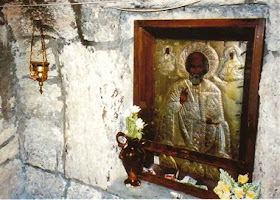 Rescuer of Trapped Woman
An old woman from Bait Jala, nicknamed Allushiyyah, went to pray in Mar Nicola’s Church. After some time she fell asleep. The Church Warder came at dusk, as he always did, and locked the doors of the Church. He did not notice the old woman.
When she awoke, she realized she was locked in and that there was no way to escape. She went up to the icon of Mar Nicola and hopefully begged him for release. She added, "My dough is in the bowl and my son is without supper." She then saw the Old Man come down from the icon. He walked with her to the door, opened the inner door, and then the outer door of the church. As she was leaving, he said, "Tell the Warder to come and lock the doors."
The woman went to the Warder and said, "Oh Abu Yusuf, Mar Nicola asks you to lock the Church doors." "But I did, old woman," he replied. The woman insisted and eventually he went to the church. To his surprise the doors were open. He then believed the old woman’s story.
Source

Saint Nicholas Festival in Beit Jala
Thousands of people come to the Beit Jala St. Nicholas Festival, honoring the town's patron saint. Street parades, fun fairs, performances, and religious processions are all part of the celebration in this predominantly Christian town. Roman Catholics and Lutherans participate with the Greek Orthodox majority in the city-wide celebration.
In AD 305 monks from Anatolia, in Asia Minor, came and established a monastery with several caves and houses. When St. Nicholas made his pilgrimage to the Holy Land, tradition holds that he lived in one of these caves from 312–315. (The Patriarchate of Jerusalem still has a text from Nicholas' hand.) The St. Nicholas Orthodox Church in Beit Jala is built on the site of St. Nicholas' cave.
As patron saint, St. Nicholas is regarded as the defender and protector of Beit Jala. During World Wars I and II, it is said that St. Nicholas stretched out over the village, protecting the people. Locals also report that he was seen with hands outstretched, catching bombs aimed at Beit Jala following the State of Israel's 1948 declaration of independence. One resident reports, "No bombs reached Beit Jala. Only the tower of the St. Nicholas Church was damaged. We know it was St. Nicholas that saved Beit Jala from any problems."
Residents also pray to St. Nicholas when help is needed. One woman remembers everyone gathering in St. Nicholas Orthodox Church to pray for rain to end a terrible drought. She says, "Before we reached our homes the rains came. I saw that rain with my own eyes."
St. Nicholas' Day is part of a three-day celebration beginning with St. Barbara on December 17, then St. Saba on the 18th, and culminating in St. Nicholas Day on the 19th. The day begins at 7:30 am with St. Nicholas Liturgy, lasting until noon. Then a procession goes to the cave beneath St Nicholas Church where the saint stayed when in Beit Jala. Later in the afternoon everyone goes to the Orthodox Club social hall for a concert given by local church choirs.
As nearly every family has at least one person named Nicholas, the festival also includes name day celebrations at home with special meals and gifts honoring the saint's namesakes. It is a time for family reunions and, of course, gifts for children.
"We love St. Nicholas. He has special feelings in his heart for all the people of Beit Jala. All the people here wait for this day."
Source
Miracles of Saint Nicholas in Beit Jala
1. Beit Jala was threatened by marauding bandits who came in from the wilds of the desert, stealing cattle, destroying crops and generally causing mayhem while the men of the village were away as conscripted soldiers. After the women and children of Beit Jala interceded for the village at the cave of St.Nicholas, the village was spared.
2. When thieves tried to steal the grape harvest, which was kept for safety on the roof of the church, a miraculous sea appeared around the church. Theft was thwarted, grapes saved.
3. During the 1967 war between Israel and Jordan, Beit Jala was bombarded by Israeli troops. St. Nicholas appeared over St Nicholas Church, catching the bombs and deflecting them into the fields. Miraculously not one person was killed, and the only injury was from a stone that flew up and hit a person's ankle.
4. One Sunday during the Second Intifada (2000–2005) the Orthodox community was gathered for Divine Liturgy when Israeli troops began firing shells at the church. The priest urged everyone to stay and pray with the assurance than St Nicholas would protect them. Everyone stayed and prayed and not one shell exploded. Everyone returned home without injury.
5. A Muslim man came to Beit Jala to shoot at the Israeli settlement of Gilo. An old man appeared to him, telling him to leave immediately. The man did so. Moments later a shell exploded on the exact spot where he had been standing. The man later identified the person who spoke to him as St Nicholas.
6. Another elderly Muslim man was deeply worried about his son who had been in an Israeli prison for some years. During the night before the man's birthday, an old man appeared at his bedside, telling him his son would return on the next day. When the man asked the visitor who he was and where he was from, he answered, "I am Nicholas, from Beit Jala. If you need to find me, just ask for me, everyone knows me there." The following day, the son returned. The old man set off for Beit Jala to share the good news with the stranger, and to thank him. Confused by the story, no one in Beit Jala could tell him who had visited him. Then the sacristan took the man into the Church of St. Nicholas, where he immediately recognized the icon of St Nicholas as the person who had visited him.
Source 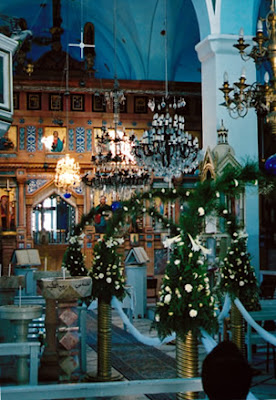 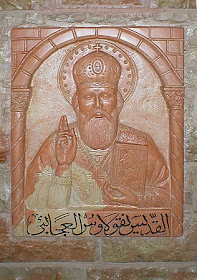 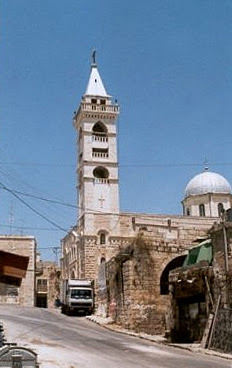