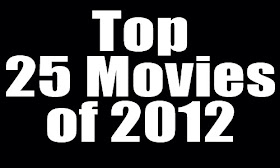 This year I had the chance to see a lot of movies, so my list is based on my own personal preferences and criteria. I decided to make a Top 25 list this year instead of the routine Top 10 mainly because there were so many good movies this year that were in sort of the same range of how good they were. Plus, since I usually make comments on each movie, this prevents me from having to do so.
After I made my list I decided to look online and compare my list with those of the "experts". There were some similarities, but mainly differences. What I noticed is that most movie critics forgot to include the movies of the first six months of the year. This is why I make my Top 10 list every summer at the six-month mark, so as not to forget. For this reason, in other lists one will rarely find The Avengers or The Grey or even Bernie and Moonrise Kingdom. Of course, usually the best movies are released towards the end of the year, and it seems like most get caught up in this, but I don't forget. Also, pretty much every list I read had the movie Zero Dark Thirty in their Top 10. This has to date only been released in five theaters, set for wider release on January 11th, so I have not seen it. There are many others I have not seen, especially foreign films, so this list may be revised in the future, but for now it stands as is. Below is my list, with a one sentence comment only for my top ten as for why I chose them.
(List updated on January 15th)


1. Django Unchained - Too many movies have been taking themselves a bit too seriously lately, so this was refreshing and it had the elements of a great movie missing in all the rest.
2. Argo - A well-acted and intense thriller/caper based on a true story.
3. The Avengers - It lived up to the hype and fantasy.
4. The Grey - A tale of survival, it made you feel the intense emotions, especially fear, angst and claustrophobia.
5. Bernie - The best comedy turned tragedy of the year, that makes you wonder what emotions you should have after seeing it. (Technically this is a 2011 movie and it was released in 2012.)
6. Moonrise Kingdom - Nostalgic, fun, and attractively eccentric, with great performances.
7. The Sessions - The best all around performances of the year, lighthearted and enjoyable, also based on a true story.
8. Life of Pi - An enthralling and moving adventure, with many allegorical undertones.
9. Lincoln - A well acted and dignified historical drama that immerses the audience into an interesting historical period.
10. Beasts of the Southern Wild - An emotional, charming and powerful journey.
11. Flight

24. Zero Dark Thirty
25. The Hobbit; The Hunger Games (tied, but also because some would not include Bernie as a 2012 film)