How Many of the Holy Innocents Were Massacred? 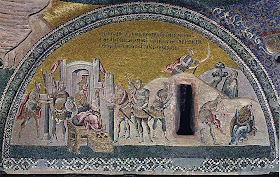 By Athanasios Moustakis
It is in the nature of man to solve queries.
Within this context must be placed the debate about the number of young children who were massacred in Bethlehem by Herod after the birth of Christ.
Examining the patristic tradition we find several references to the event, without any reference to the number of innocent victims.
The number 14,000 seems to have been established at some later time, but was never fully incorporated, nor is it in the synaxaria.
For example, the Great Horologion of the Apostoliki Diakonia edition places this number between parenthesis.
Contemporary biblical research has resulted in a much smaller number based on the calculation of the number of children possible to have grown up in Bethlehem and its surroundings. Maybe around 30 to 40.
In the Holy Land they show pilgrims the graves of the infants, which come nowhere close to the number of 14,000.
How many infants were there then?
Obviously we do not know.
The danger in this debate is to focus on the (small or large) number and lose the essence of the problem which is to be identified in the fact that Herod, grounded in an irrational and selfish fear of losing his throne, sacrificed the innocent.
If there were fewer children in Bethlehem, would the crime be less? Would the mother's grief be less?
The Fathers focus on the event itself and not on the (technical) "details". The pain caused by the malice interested them rather than how many kids died "sifted like wheat", as the kontakion of the feast says.
The incident of the massacre of the infants is not recorded in other sources of the time, except by Matthew the Evangelist, but it perfectly matches with other sources regarding the character of Herod, who did not hesitate to kill several of his wives - among them even the only one he seems to have loved, Mariamne - but also several of his children so as not to take his throne.
This crime, like all the others committed by Herod, is unimaginable to the average person: maintaining the throne against a vague threat, this weighs more for Herod than the lives of one, two, three, four... children, even if they are his own.
What the blurred and distorted mind of the king failed to grasp is that his crime was based on the sacrifice of innocent babies, who are honored as saints, martyrs of the Church who watered It and are watering It with their blood.
The meaning, therefore, is not in the number, but that even one child was slain, a victim of human selfishness. We should not forget that the Church places great value on one person, on the hundredth sheep, on one person who repents. Do you think we know how many saints there are? How many martyrs? How many neomartyrs? It is enough for us to know that when they were asked to choose Christ or not, they chose Christ.
Many years!
Source: Translated by John Sanidopoulos
John at 10:13:00 AM
Share
‹
›
Home
View web version