The Lay Porter Who Resurrected A Dead Man 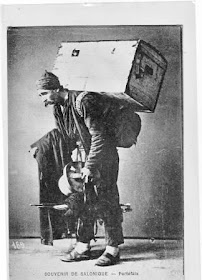 Elder Paisios the Athonite related the following wondrous true story:
I once met a man who was very kind and sensitive. Just imagine, he even refused to stay overnight at the monastery, because he didn’t want to be a burden to the monks. I used to be the host monk at the time, at the Iveron Skete, when I went out onto the balcony for a moment at noon and saw a man lying down on the stones outside. Well, well, I wondered, what is he doing out there? So I went down to him.
"What are you doing here, blessed one? Why don’t you come into the monastery, where we can offer you our hospitality?"
"No, no, I’m just fine here, don’t concern yourself," he said.
I pressed him to come in, but he refused. He said: “All through the night, the fathers here were in vigil. They’re tired, they fast, they retire at noon to get some rest, and I’m supposed to disturb them? Its not proper!”
See what kind of good thoughts he made? That is an indication of mental and spiritual health, whereas other visitors come here, demanding to be served, and then they have nothing but malicious thoughts - they even accuse you. I finally convinced him, and brought him into the monastery, where we became better acquainted and eventually became friends.
Now listen to what this man had done. He was orphaned from his youth. He never knew his parents; he grew up in an orphanage. When he grew up, he worked as a porter in the port of Thessaloniki.
He married, and was very happy for that, as he had found the family that he longed for. His in-laws were like parents to him. They moved into a house near his in-laws and he was extremely fond of them. Imagine that, after leaving work every day, he would first go to his in-laws to greet them, to see if they needed anything, and would afterwards go to his own home to see his wife.
He was also very pious. He would repeat the prayer “My Lord Jesus Christ, have mercy on me”. He would carry loads and pray.
He was concerned however, that his in-laws were not believers. In fact, his father-in-law blasphemed and that made him very sad. So, he prayed to God, asking Him not to take them away from this life, before they had properly repented. He even asked me to pray for this problem.
So, there came a time that his father-in-law became very ill, and had to be taken to hospital. He was in there for days. One day, after work as usual, he went directly to the hospital, without passing by his home first. He looked for his father-in-law, but didn’t find him in his room… He searched everywhere, asking for him. “Who? Him? Oh, he passed away. He’s downstairs, in the morgue, where they keep all the deceased patients”, they told him.
It was as if lightning had struck him. “Why, my Lord, did You take him away, if he wasn’t ready, and he didn’t even have a chance to repent? Why, my God?”
He began to pray fervently, with profound pain: “What is it for God, to bring him back? Nothing!” he thought, and began to beseech God accordingly.
He found his way downstairs, and looked around in the morgue, only to find him frozen, dead. He grabbed his father-in-law by the hand, insisting, “Come on, get up, let’s go home”. The dead man immediately came alive; he got up and followed him.
"Really, Elder, did that really happen?" I asked him, dumbfounded.
"Yes, it is really true."
"And is that man still alive today?"
"No, he has passed away. He lived on for a few more years, he repented, he became a much kinder person, a veritable lamb, and Christ then took him into Paradise."
I was amazed.
"Do things like that actually happen in our day?" I asked with wonder.
"See? And he was an ordinary layman. But he had such simplicity! And such profound faith. Didn’t Christ say: 'Whosoever believes in Me, can do whatever I do, and even greater things'? Why should this incident seem strange? Didn’t Christ resurrect the dead? Lazarus? The widow’s son? Jairus’ daughter? Didn’t the Apostles resurrect the dead? Haven’t we read so many wonders in the lives of the saints? Why should this seem strange?"
Source: From Father Paisios Told Me, by Athanasios Rakovalis, Orthodox Hive Publications, pp. 166-168. Photo depicts a random street porter from Thessaloniki in 1917.
John at 1:27:00 PM
Share
‹
›
Home
View web version