Sunday of the Holy Forefathers of Christ 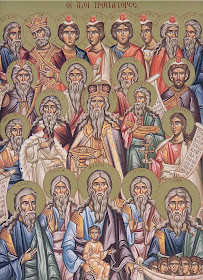 Verses
Receive joy O Forefathers of old,
Beholding Christ the Messiah drawing near.
Rejoice Abraham, for you have been shown to be the great-grandfather of Christ.
On the Sunday that occurs on or immediately after the eleventh of this month, we commemorate Christ's forefathers according to the flesh, both those that came before the Law, and those that lived after the giving of the Law.
Special commemoration is made of the Patriarch Abraham, to whom the promise was first given, when God said to him, "By your seed shall all the nations of the earth be blessed" (Gen. 22:18). This promise was given some two thousand years before Christ, when Abraham was seventy-five years of age. God called him and commanded him to forsake his country, parents, and kinsmen, and to depart to the land of the Canaanites. When he arrived there, God told him, "I will give this land to your seed" (Gen. 12:7); for this cause, that land was called the "Promised Land," which later became the country of the Hebrew people, and which is also called Palestine by the historians. There, after the passage of twenty-four years, Abraham received God's law concerning circumcision. In the one hundredth year of his life, when Sarah was in her ninetieth year, they became the parents of Isaac. Having lived 175 years altogether, he reposed in peace, a venerable elder full of days.
Apolytikion in the Second Tone
You justified the Forefathers by faith, and through them betrothed yourself, aforetime, to the Church taken from out of the Gentiles. The saints boast in glory, for from their seed, there exists a noble crop, who is she who without seed has given You birth. By their intercessions, O Christ our God, save our souls.
Kontakion in Plagal of the Second Tone
You did not worship the graven image, O thrice-blessed ones, but armed with the immaterial Essence of God, you were glorified in a trial by fire. From the midst of unbearable flames you called on God, crying: Hasten, O compassionate One! Speedily come to our aid, for You are merciful and able to do as You will. 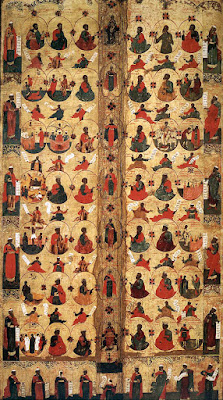