The Journey to Bethlehem in Chora 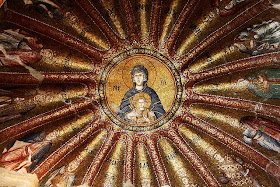 The Chora Church was originally built as part of a monastery complex outside the walls of Constantinople, to the south of the Golden Horn. Literally translated, the church's full name is the Church of the Holy Savior in the Country.
The original church on this site was built in the early 5th century, and stood outside of the 4th century walls of Constantine the Great.
The majority of the fabric of the current building dates from 1077–1081, when Maria Dukaina, the mother-in-law of Emperor Alexios I Komnenos, rebuilt the Chora Church as an inscribed cross or quincunx: a popular architectural style of the time.
The powerful Byzantine statesman Theodore Metochites endowed the church with much of its fine mosaics and frescoes. Theodore's impressive decoration of the interior was carried out between 1315 and 1321. The mosaic-work is the finest example of the Palaeologian Renaissance. The artists remain unknown.
The exonarthex (or outer narthex) is the first part of the church that one enters. Among the mosaics that decorate the exonarthex, are the Journey to Bethlehem, Enrollment for Taxation, and the Nativity of Christ.
Apolytikion in the Fourth Tone
Make ready, O Bethlehem, for Eden is opened.
Prepare, O Ephratha, for Adam and Eve are renewed.
Salvation enters the world and the curse is destroyed.
Make ready, O hearts of righteous men,
Instead of myrrh, bring songs as an offering of wisdom.
Receive salvation and immortality for your bodies and souls.
Behold, the Master Who lays in a manger
urges us to complete our spiritual songs.
Let us cry to Him without ceasing: O Lord, glory to Thee. 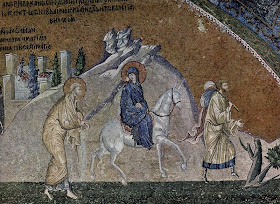 Apolytikion in the Fourth Tone
As the fruit of David's seed, Mary was registered of old
with the Elder Joseph in the little town of Bethlehem,
when she conceived with a seedless and pure conception.
Behold, the time was come that she should bear her Child,
but no place was found within the inn for them;
yet the cave proved a delightful palace
for the pure Lady and Queen of all.
For Christ is born now to raise the image
that had fallen aforetime. 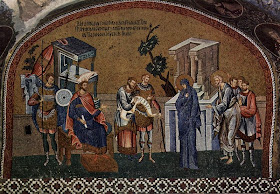 Kontakion in the Third Tone
On this day the Virgin cometh to a cave
to give birth to God the Word ineffable,
Who was before all the ages.
Dance for joy, O earth,
on hearing the gladsome tidings;
with the Angels and the shepherds now glorify Him
Who is willing to be gazed on as a young Child
Who before the ages is God. 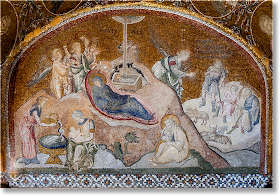 Vesperal Sticheron in Plagal of the Fourth Tone
What shall we offer Thee, O Christ,
Who for our sakes hast appeared on the earth as a man?
Every creature which Thou hast made offers Thee thanks.
The angels offer Thee a song;
The heavens, their star;
The wise men, their gifts;
The shepherds, their wonder;
The earth, its cave;
The wilderness, the manger;
And we offer Thee a virgin mother.
O Pre-eternal God, have mercy on us!