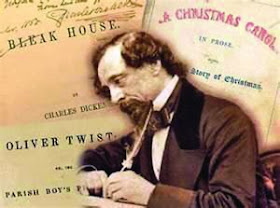 "My dear children, I am very anxious that you should know something about the History of Jesus Christ. For everybody ought to know about Him." - Charles Dickens
The last work of Charles Dickens to be published was a private retelling of the Gospel narratives, titled The Life of Our Lord. It was written in 1849 specifically for his children that they may intimately know the life of Jesus Christ, and he ordered that it never be published. However, when all his children had died, it was made public after 85 years and published in 1934. Dickens respected and loved very much the Bible and Christ and sought to instill in his children the same reverence, though he was never dogmatic about it nor preachy of his personal views, since he opposed all manner of religious fanaticism.
He ends his book with the following advice for his children as to what Christianity should be for them, and that accurately sums up his views:

Remember! – It is Christianity TO DO GOOD always – even to those who do evil to us. It is Christianity to love our neighbour as ourself, and to do to all men as we would have them Do to us. It is Christianity to be gentle, merciful, and forgiving, and to keep those qualities quiet in our own hearts, and never make a boast of them, or of our prayers or of our love of God, but always to shew that we love Him by humbly trying to do right in everything. If we do this, and remember the life and lessons of Our Lord Jesus Christ, and try to act up to them, we may confidently hope that God will forgive us our sins and mistakes, and enable us to live and die in Peace.

Also, read How to Be a Decent Person: Charles Dickens’s Letter of Advice to His Youngest Son. This letter by Charles Dickens to his son in Australia was written 19 years after he wrote The Life of Our Lord. Among the advice he gives his son is the following:

Try to do to others, as you would have them do to you, and do not be discouraged if they fail sometimes. It is much better for you that they should fail in obeying the greatest rule laid down by our Saviour, than that you should.

I put a New Testament among your books, for the very same reasons, and with the very same hopes that made me write an easy account of it for you, when you were a little child; because it is the best book that ever was or will be known in the world, and because it teaches you the best lessons by which any human creature who tries to be truthful and faithful to duty can possibly be guided. As your brothers have gone away, one by one, I have written to each such words as I am now writing to you, and have entreated them all to guide themselves by this book, putting aside the interpretations and inventions of men.

You will remember that you have never at home been wearied about religious observances or mere formalities. I have always been anxious not to weary my children with such things before they are old enough to form opinions respecting them. You will therefore understand the better that I now most solemnly impress upon you the truth and beauty of the Christian religion, as it came from Christ Himself, and the impossibility of your going far wrong if you humbly but heartily respect it.

Only one thing more on this head. The more we are in earnest as to feeling it, the less we are disposed to hold forth about it. Never abandon the wholesome practice of saying your own private prayers, night and morning. I have never abandoned it myself, and I know the comfort of it.