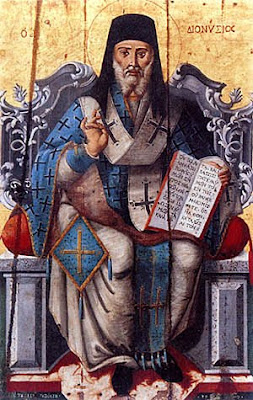 By John Sanidopoulos
In the summer of 1577 Abbot Daniel left Zakynthos in order to travel to the Holy Land and worship at the Tomb of Christ. On the way he arrived in Athens from Zakynthos and met with the virtuous and wise Archbishop Nikanor. The Archbishop was drawn to Daniel's piety, simplicity, innate humility, and excellent theological grounding - he was adorned with a whole array of priestly gifts and virtues. For this reason the Archbishop wanted to ordain him as Archbishop of Aegina, Hydra, Poros and Angistria. During this time this area was under the auspices of the Patriarchate of Constantinople, and depended on the Metropolis of Athens, not functioning on its own. Daniel at first refused this proposal declaring that he did not have the required strength to undertake such a high and demanding office. Eventually however Nikanor succeeded in persuading him.
Soon after receiving confirmation from Ecumenical Patriarch Jeremiah II, Archbishop Nikanor ordained Daniel in the Church of Panagia Gorgoepikoou (later named St. Eleutherios, next to the Cathedral of Athens). At the ordination the Archbishop gave Daniel the name Dionysios, in honor of St. Dionysios the Areopagite, Patron Saint of Athens.
Following the invasions of Barbarossa and the ensuing slaughter of its inhabitants in 1537, Aegina was almost entirely deserted. The few Aeginites who survived the slaughter or the captivity of slavery had taken refuge to the mountains in Paleochora. Over the next forty years a few intrepid settlers came and settled on the island from neighboring areas. By the time St. Dionysios arrived, Aegina was going through a small renaissance. From 1537 until 1577 the Archbishop's throne in Aegina had been empty, and Dionysios was found to be a worthy Hierarch of the reborn Aegina. 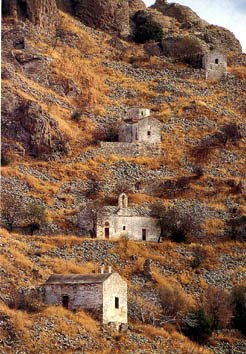 Saint Dionysios served Aegina from the end of 1577 until the end of 1578. He came to love the island and its people. He attended to every need of the inhabitants, and supported them in their recovery and struggles. At the Metropolis in Paleochora of Aegina, the stone throne can still be seen, just outside the entrance of the church, where after the Divine Liturgy Dionysios would distribute the antidron to his devout congregation. Just beside the residence of the Archbishop, St. Dionysios settled in a Cell which also can still be seen.
After a year in Aegina serving his sacred goal and guiding his spiritual flock, St. Dionysios longed for the monastic life and solitude he loved in the Strofades and Anafonitria. Panos Kalligas gives us a clear explanation:
"The Archbishop, in Aegina, was virtually without a real congregation. It really existed only in name. And so he felt he was inadequately carrying out his ecclesiastical obligations. For an Archbishop as conscientious and direct in character as he was, he must truly have suffered during his time on the throne there, from 1577 until 1578. To the great sadness of the Aeginites he relinquished it, returning to Zakynthos and settled once more in the Monastery of Anafonitria."
Returning to Zakynthos, St. Dionysios never had the chance to worship in the Holy Land, realizing his new responsibilites and duties as a Hierarch of the Church. Today he is considered the Patron of the island of Aegina and the hospital of the island is named in his honor. His feast is celebrated everywhere on December 17th.
John at 11:45:00 AM
Share
‹
›
Home
View web version