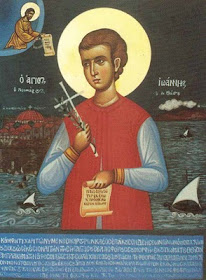 John was from the town of Maries of Thasos. At the age of 14 some of his fellow countrymen brought him to Constantinople, where he was led to some Christian in Galata to learn to be a tailor.
One day his mentor sent him to a Jewish trader to buy thread. John had a disagreement with the trader over the price. During this the Hotza was calling from the minaret for the noon-time prayer. The Jewish trader took advantage of the opportunity and began to cry out to the Turks:
"Don’t you hear this kid that he is cursing your faith and your pilgrimage?"
As soon as the Turks heard this they believed the Jew, and they seized the youth John, beat him mercilessly and took him to Beziri, where they testified that he cursed their faith. The Saint swore that he was slandered by the Jew. Beziri, as soon as he saw that he was dealing with a child, felt sorry and told him:
"Come and become a Turk, that your life be sweetened and that I may have you close to me, to honor you and make you rich."
He tried with these promises and flatteries to distance him from Christ. However the blessed child responded: "I would never deny my sweetest Jesus Christ, even if you inflict on me a thousand tortures, or even if you granted me your whole kingdom." 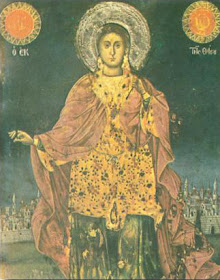 Then Beziri ordered that they behead John. They led him to the agora, there where the fur workshops were, in front of the bath, across from the fountain, and delivered him to the executioner. He kneeled and, wishing to scare him, swung the sword and hit him on the neck, cutting him ever so little. Seeing in the end that the Saint was accepting death with great joy, without quivering at all, he swung the sword with strength and beheaded him.
Thus the 14-year-old John from Thasos, the tailor, received the crown of martyrdom, on December 20, 1652.
His biography was written by John Kariophyllis and Meletios Syrigos.
John at 11:28:00 AM
Share
‹
›
Home
View web version