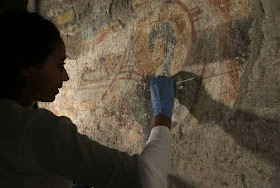 By John Sanidopoulos
On Monday October 1st, Italy's Culture Ministry allowed a rare peak at a (EURO)3 million ($3.8 million) restoration of medieval frescoes in the ancient church of St. Mary in the Roman Forum (Santa Maria Antiqua).
During the visit on Monday, a restorer in blue rubber gloves stood on a metal scaffold and took a small paint brush to the dark clothing of a Byzantine fresco of the Virgin Mary on the walk of the church experts refer to as the Sistine Chapel of the eighth century.
This church is the oldest Christian monument in the Roman Forum and was built in the 5th century. It includes the earliest Roman depiction of Santa Maria Regina depicting the Virgin Mary as a Queen in the 6th century. Pope John VII used this church in the early 8th century as see of the bishop of Rome.
The church was partially destroyed in 847, when an earthquake caused parts of the imperial palaces to collapse and cover the church. For this reason, a new church called Santa Maria Nova (New St. Mary, now Santa Francesca Romana) was erected nearby by Pope Leo IV, on a portion of the ruined temple of Temple of Venus and Roma, where once stood a chapel commemorating the fall of Simon Magus. Santa Maria Antiqua suffered further damages during the Norman Sack of Rome (1084).
The church of Santa Maria Liberator was built in 1617 on its ruins, but then demolished in 1900 to bring the remains of the old church to light.
The inside of the church is decorated with ancient frescoes in Byzantine style, dating back to Pope Martin I (649-655), Pope John VII (705-707), and Pope Zachary (741-752).
The restoration project aimed at bringing the medieval frescoes back to their early glory has been under way since 2001.
The work is expected to be completed by the end of 2013. 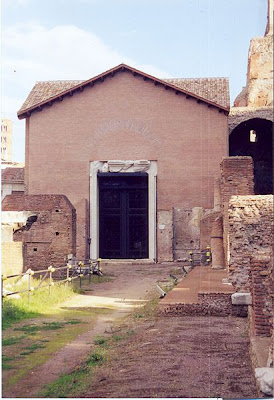 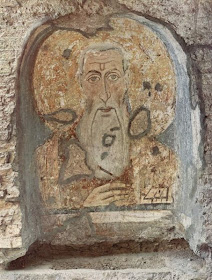 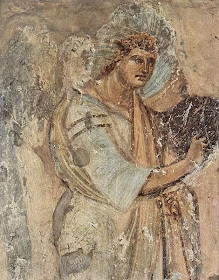 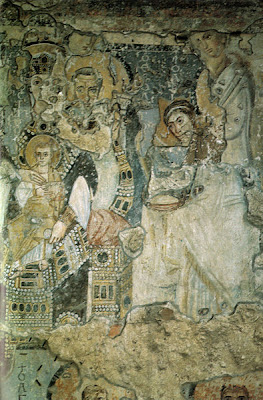 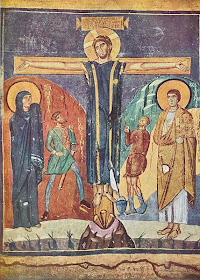 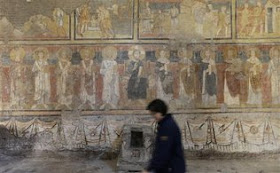