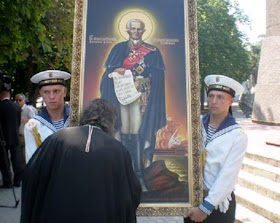 By John Sanidopoulos
Having completed preparations for a long-range cruise, Black Sea Fleet (BSF) landing ship Novocherkassk left Sevastopol. Within the next 1.5 months the ship will be stationed in the Mediterranean Sea and pay 7 calls at Greek and Montenegrin ports.
During the farewell ceremony, the rector of St. Nicholas Church, Father George, handed over the icon of St. Feodor Ushakov to the crew and blessed the mariners.
The Holy Admiral Feodor Ushakov was recognized as a saint by the Russian Orthodox Church in 2001. He contributed greatly to the liberation of the Ionian Islands from the Franks in 1800 which led to the creation of the "Ionian State".
The crew and will participate in various cultural activities scheduled during the visits to foreign ports. They will represent the Russian Navy at the traditional "Russian Week" festival to take place on Corfu and other Ionian islands. Greeks recognize his contribution, and have expressed their gratitude by erecting many monuments to him throughout the country.
Fr. Michael Mamaev is accompanying the icon on the ship and will celebrate the Divine Liturgy with Greek priests at the various Greek ports.
When visiting Pilos, Russian servicemen will attend the festivities of the 185th anniversary of the Navarino Battle. It is also planned to visit the Greek port of Thessaloniki and the Montenegrin port Bar.
There is the BSF marine unit onboard Novocherkassk; it is attached to the crew in order to maintain the ship's security. 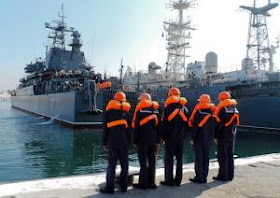