Christ and the End of Satan's Dominion 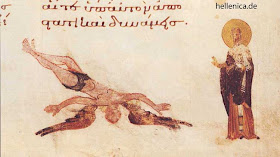 By St. Nikolai Velimirovich
"O thou enemy, thy destructions are come to a perpetual end, even as the cities which thou hast destroyed; thy memorial is perished with a roar" (Psalm 9:6).
The enemy of the human race, the murderer of men from the very beginning, has used every weapon and intrigue against man. He thinks up new weapons and new intrigues day and night, in order to destroy someone as a roaring lion, "seeking whom he may devour" (I Peter 5:8). He hides like a poisonous snake and awaits his prey; he stretches his webs everywhere, like a spider, with the sole purpose of ensnaring some human soul and entrapping it in his foul kingdom.
Pagan peoples were his cities. Until the coming of Christ, he ruled untroubled and absolutely in them. When they served idols, they served him; the practices of soothsaying and fortune-telling served him; he protected, directed and enhanced men's unbridled licentiousness; human sacrifice, fiery passions, discord, war, evildoings of all descriptions - this was all pleasure for him. But in the end, no weapons remained in him; his "cities" were destroyed and his memorial is perished with a roar.
This "end" of which the prophet speaks is the coming of Jesus Christ the Lord into the world. The Lord manifested His power over the devil when He overcame his temptations on the mountain. He manifested His authority in driving demons out of men, commanding them to go this way or that; He manifested His invincible lordship over sin and death by His suffering and Resurrection. And, what is perhaps most important, He harrowed hell and scattered the demonic power. He did not desire to utterly destroy the demons, but to disperse them and smash their weapons; He smashed them and scattered them as He later did the Jews, but more terribly than He did the Jews. He freed the people from their domination; and even more importantly, He gave men authority over the demons, such that they can drive the demons out by the power of His name. Do you see how the Lord linked His victory over the demons with His mercy toward men? He so weakened and broke them, He so confused and dispersed them, that He placed them under the authority of men. Even so, the Lord did not grant authority over demons to all men, but only to those who believe in Him and who follow His commandments. He gave them authority, and He also gave them a weapon. That weapon is the Cross.
O Lord our God, our Savior from the dominion of the devil, help us also to do that "least part" that Thou hast left us to do. To Thee be glory and praise forever. Amen.