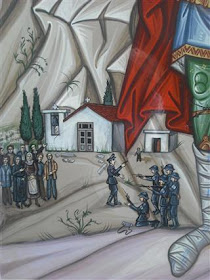 It was October of 1943. The Germans were determined to spread death before leaving Thebes, leaving the district of Tachi deserted. They had been informed that hidden ammunition was there which insurgents were going to use against them. This was true. In the area where the bell tower is today, a storage space was filled with weapons and ammunition. The Germans ordered everyone to gather outside the church, especially requesting a list of men 16 years old and over, and anyone not present was to be executed on the spot.
Across from the unfortunate inhabitants, the firing squad was ready for the signal to send a hot bullet through the skulls of hungry bodies. Screening was done everywhere: in homes, warehouses and even underground. They even checked the church for ammunition. It should be noted that the massacres of Distomo (June 1943) and Prodromou (August 1943) had already taken place by the Germans, and they were ready to do the same here.
The entrance of the room where the ammunition was hidden was shut with a wooden door, which opened and closed with the smallest blow from the wind, prolonging the agony of the hopeless men. They watched the bloodthirsty officer reach that spot two and three times, but neither military intuition nor human curiosity made him look through the door.
Soon after the Nazi's left empty-handed. Tears of emotion poured from the eyes of all. The people lit candles, knelt and prayed, thanking Saint Nicholas the New for preventing the German officer from identifying the cluster and saving them from certain death. If it wasn't for this miracle, the last Sunday of October would not be a celebration in Thebes as a miracle, but a commemoration of a massacre.
Source 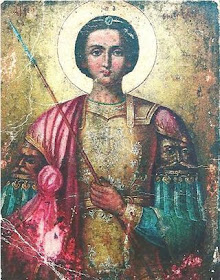