The Monastery of Panagia Trooditissa in Cyprus 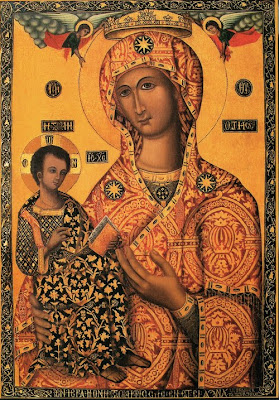 The Monastery of the Panagia of Trooditissa is established in a pine covered area of Troodos, between the villages of Platres and Prodromos. The Monastery is built higher than any other Monastery in Cyprus, as it is situated 1,380 metres above sea level.
The Panagia of Troodos has also been named Panagia the Olympian, a name given due to Mount Olympus, which is the highest mountain in Cyprus, and for this reason she is considered to be the Queen of the Cypriot Olympus. However, the Monastery of Panagia Trooditissa is also called the Μonastery of the Panagia Aphroditissa, since the Virgin Mary has succeeded Aphrodite Akraia (Aphrodite of the High Mountain), who was worshiped on top of Troodos, on Mount Olympus, in antiquity. Like Aphrodite Akraia in earlier times, the Panagia of Trooditissa is today known to bring fertility to sterile women.
The history of the Monastery goes back to the 8th century A.D. During the iconoclastic period an iconophile monk brought to Cyprus from Asia Minor one of the 70 icons of the Virgin attributed to the Evangelist Luke. After living for 25 years at the Monastery of St. Nicholas of the Cats in the area of Lemasol, the monk left for the interior of the island and took the historic icon with him to the "Cave of Trooditissa" where he took refuge along with another monk. There, at this cave, the two anonymous hermits lived their lives, and there, they were also buried. 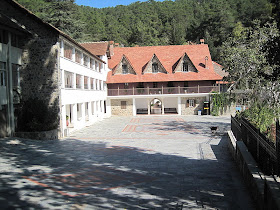 About 200 years later, in 990, the Holy Cave was revealed to the Christians along with the beautiful icon of the Virgin Mary. According to tradition, a shepherd lost his goat during the night, and he was surprised when he saw a light appearing among the rocks high on the mountain, and with awe he told about his discovery to the other villagers. For some time the mysterious light was to be seen shining in the night, but nobody dared to attempt to find out what it was. One day, they decided to inform the authorities of the Cypriot Church, where it was decided that a priest should accompany the team that was to investigate this mystery. When they arrived near the light high on the mountain, they discovered the cave with the icon of the Virgin Mary, but there was no human presence there. The inexplicable mystery had caused great enthusiasm and excitement in the minds of the Ecclesiastical Authority, which came to the conclusion that as the phenomenon of light was a miracle, it was people's responsibility to build a Monastery on the spot where the light had appeared in order to honor the Holy Cave. However, an invisible power prevented the transfer of water needed for the construction of the monastery. The clay pots slid from the shoulders of workers and broke on the rocks. Meanwhile what was built during the day, fell into ruins during the night. One morning, a pot full of water was discovered to the west of the cave which was at a lower and a leveled place. It was certain that an Angel of God had placed the pot there in order to reveal the place where a hidden spring was situated, also indicating a much more suitable place for the Monastery to be built. And so it was, the spring was discovered and the Monastery was built nearby without any more obstacles. When the building of the Monastery was finished, the icon of the Panagia Trooditissa which was found in the cave was enthroned in the church accompanied by a brilliant ceremony.
The original church of the Monastery was burned by the Turks in 1585, and the second church was again burned down due to a lit candle left in the church in 1842.
The years passed and the reputation of the Monastery grew with the arrival of a childless man of a high position, a Minister by the name of John, who came from Beirut along with his wife in order to venerate the icon and plea to the Virgin Mary to help them have a child and in exchange they promised to devote that child to the Monastery. After these heartbreaking pleas, his wife conceived a baby and gave birth to a son who was baptized at the church of Trooditissa. When the boy came of age his parents offered him to the Monastery as was their promise. However, after ten years had passed they returned to the Monastery to buy him back. The Fathers of the Monastery did not allow the negation of the given promise, but the parents insisted. Then the following miracle happened: while they were in church, a huge rock fell from the wall of the building which was going to kill the young man who was standing beneath it during that time. The miraculous icon of the Virgin moved from its position and covered the boy right away. This way he was saved from sure death and the Virgin accepted to be hit by the stone instead. This stone remains from that time to the present day stuck at the back side of the icon. When the boy saw this miracle he stayed at the Monastery and he became a monk where he lived the rest of his life until his death. From then on, the stone which is stuck at the back side of the icon of the Panagia Trooditissa cures young children who suffer from teeth grinding. but they must be brought there and kiss it first. 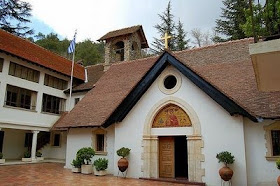 Another miracle by the Panagia Trooditissa associated with fertility in sterile women is as follows: One day during the year 1864, a lady who had grown too old and could no longer conceive children, visited the Monastery and asked the Panagia of Trooditissa to give her the happiness of becoming a mother. The desire of the woman was heeded by the Virgin Mary who fulfilled the desired result. As a token of thanks, the woman gave to the Virgin Mary the beautiful silver belt with the large buckles which she was wearing during her pregnancy as a present. Today, this belt is suspensed around the icon of the Panagia Trooditissa, and any woman who cannot conceive children comes to the Monastery and the hieromonk (monk-priest) fastens it round her waist. In doing so, it is believed that she will become a mother.
Apart from giving fertility to sterile women, the Panagia Trooditissa performs many other miracles. For example, she prevents the disaster of hail and stops droughts.
Panagia Trooditissa celebrates on the feast of the Dormition of the Theotokos on August 15th.
John at 8:35:00 AM
Share
‹
›
Home
View web version