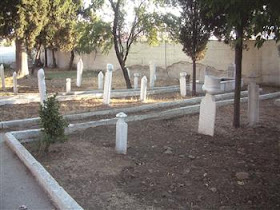 August 8, 2012
Hurriyet Daily News
A place known as a place of martyrdom in the northwestern province of Balıkesir’s Erdek district and visited on Victory Day each Aug. 30 for the last 30 years has been revealed to actually be a Byzantine cemetery thanks to an inspection by the district governorship and Garrison Command. The location has since been removed from this year’s Victory Day program.
A 10-person committee inspected the region and announced that it contained many Byzantine graves, Erdek District Governor İsmail Kaygısız said. The same region was found to also contain the graves of locals and foreigners, he said.
“When graves of martyrs were not found in the region in documents, the Garrison Command determined that the place was not one of martyrdom. This is why we have cancelled the visit to the place and removed it from the Victory Day program,” Kaygısız said.
Erdek Mayor Hüseyin Aysan said the Erdek Mufti had wanted to build in the region after developments but the demand was rejected by the High Council of Monuments because of the Byzantine graves.
John at 4:06:00 PM
Share
‹
›
Home
View web version