The “Explosion” of Orthodox Christianity in Guatemala 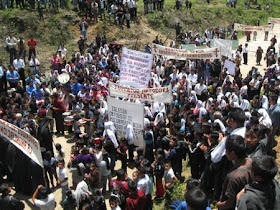 Jesse Brandow
August 27, 2012
St. Vladimir's Orthodox Seminary
Whenever someone speaks of “American Orthodoxy,” there is usually an unspoken understanding that the term refers to North American Orthodoxy: the United States, Canada, and sometimes Mexico. This way of speaking is indeed convenient, considering that the majority of Orthodox parishes in the Western Hemisphere are still located in North America. However, in the past few years a great change has occurred in Latin America that makes it increasingly inaccurate to focus on North America as the western outpost of Orthodoxy. Just two years ago, in 2010, the Orthodox Church received a large group of Guatemalan converts numbering in the hundreds of thousands. Now Guatemala, and possibly all of Latin America, holds tremendous promise of becoming fertile ground for the Orthodox Christian Church.
The seed of Orthodoxy in Guatemala was planted by the nuns of the Hogar Rafael Ayau, an Orthodox orphanage in Guatemala City. Many people are familiar with the incredible work of Mother Inés, Mother Ivonne, and Mother María. In fact, just this year a group of seminarians from St. Vladimir's Seminary traveled with the seminary Chancellor/CEO Archpriest Chad Hatfield to see the work of the nuns and to assist at the orphanage. It is through these nuns that the Guatemalan soil was first prepared for the Orthodox Church.
Now, with the recent chrismation of a new group of Guatemalan converts that numbers between 100,000 and 200,000, the Orthodox Church is ready to blossom in Guatemala. The magnitude of the event cannot be overstated. Almost overnight, Guatemala has become the most Orthodox country in the Western Hemisphere (by percentage of national population). Furthermore, the Orthodox communities in Guatemala continue to grow rapidly and attract attention throughout Guatemala. There is still, however, little information available to the broader Orthodox world on the history and character of these new communities. For this reason, I traveled to Guatemala this summer, spending two months visiting many of the Orthodox parishes, meeting the leaders of the communities, and accompanying the bishop of the Guatemalan Church—His Eminence, Metropolitan Athenagoras—as he made his historic first visit to the new parishes in Guatemala. I returned to the United States with the desire to share what I saw and the conviction that the Holy Spirit is at work with power in Latin America.
The new Orthodox communities are in touch with the nuns of the Hogar, but they are an independent movement with a unique history. These communities are mostly made up of native Mayans and have roots in the Roman Catholic Church. They first began in the 1970s and 1980s as a Roman Catholic renewal movement called the “Charismatic Renewal in the Holy Spirit.” For various reasons, including the movement's charismatic prayer practices and emphasis on music in church services, the parishes of the Charismatic Renewal became estranged from the Roman Catholic Church. Many communities went decades without sacraments until, in the 1990s, a former Roman Catholic priest named Fr. Andrés Girón took the movement under his wing. A very prominent figure in Guatemala, Fr. Andrés had served in the Guatemalan senate, acted as an ambassador to the United Nations, and led a large movement for land reform among the rural poor of Guatemala. These activities were part of what caused Fr. Andrés to come into tension with the Roman Catholic Church, eventually leaving the Church before taking leadership of the parishes of the Charismatic Renewal. 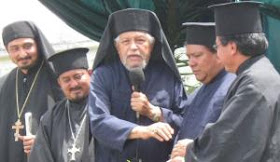 It was through Fr. Andrés that the communities of the Charismatic Renewal began to move towards the Orthodox Church. Fr. Andrés first joined a non-canonical Orthodox group called the Society of Secular Clerics, and he was soon ordained a bishop in this group. However, as he became more familiar with broader Orthodox Christianity, Fr. Andrés sought out the canonical Orthodox Church. A number of priests from other countries came to evaluate the situation in Guatemala, and then in April of 2010, Fr. Andrés was received into the canonical Orthodox Church under the Ecumenical Patriarch of Constantinople.
After Fr. Andrés entered the Orthodox Church, then began the process of ordaining priests, chrismating the faithful, and educating the hundreds of thousands of new Orthodox. Over the last two years, a total of eight priests who were originally ordained non-canoncially have now been ordained as priests in the Orthodox Church. One of those priests spent a year in Greece to learn about Orthodoxy and become an iconographer, and there are plans for other priests to spend time abroad growing in Orthodoxy. The priests have begun to train a large team of catechists to go into all the villages to teach the people about Orthodoxy. In addition, a missionary priest from Pennsylvania, Fr. John Chakos, has begun working in Guatemala to assist the Guatemalan leaders and teach the faithful.
While the eight priests of the Guatemalan Orthodox Church are familiar with Orthodox theology and history, the majority of the Orthodox faithful still have much to learn and need time to grow. Many parishes lack basic iconography and essential liturgical supplies, and the communities are still relatively unfamiliar with the Divine Liturgy and other Orthodox services. Nevertheless, the communities have the seed of powerful faith: parishes are always packed on Sundays, sometimes with close to a thousand people; lay leaders are well-versed in Scripture and deliver convicting sermons to the congregations; and many communities center all of their activities around the Church, with some villages faithfully tithing ten percent of their crops and money. The Guatemalan Orthodox are indeed still newborns in the Church, but they are already growing in the Orthodox Church and have reacted well to the changes that are being made to bring them closer to the fulness of the faith. These “little ones” of Guatemala, the newborn Mayan Orthodox, will not be turned away by the Lord.
As we continue to discuss the future of “American Orthodoxy,” we must not forget that the providence of God often guides the Church in unexpected ways, and His providence is now calling our attention to Latin America. When, in 1867, St. Innocent reflected on the sale of Alaska to the United States, he said, “I see in this event one of the ways of Providence whereby Orthodoxy will penetrate the United States.” These words are often recalled in discussions of American Orthodoxy, along with the stories of the rapid conversion of native Alaskans to the Orthodox Church. Now, in our lifetime, as many as 200,000 native Guatemalans have turned to the Orthodox Church—is this not the continuation of God's Providence in the Western Hemisphere? The Holy Spirit has opened a door for the faith to penetrate Latin America through Guatemala, and this event calls us to recognize and believe in the tremendous potential for the Orthodox Church to flourish in this hemisphere. We are called to stand with the Orthodox Christians of Guatemala: through prayer, through donations of liturgical supplies and monetary support, and through missionaries and teachers who will go to Guatemala to help the people learn and grow.
Finally, we are called to once again be inspired by the richness of “American Orthodoxy.” From the small wooden churches of Alaska to the large food festivals of Pittsburgh and Chicago, from the Orthodox parishes that dot South America to the Mayan communities that live under the volcanoes of Guatemala—the beauty of God's Church is alive and growing in the Western Hemisphere. Let us embrace the work of God's Providence, supporting the Guatemalan Orthodox Church and tending to the faith throughout all the Americas, so that the seed of American Orthodoxy will grow and blossom.
For more information on the Guatemalan Orthodox Church and my summer travels to the Guatemalan communities, see my blog, which has articles and pictures that give a fuller understanding of Guatemalan Orthodoxy. If you would like to know how you can support the Guatemalan Orthodox Church, please contact Fr. John Chakos, the missionary priest who is serving in Guatemala under the Orthodox Christian Mission Center (OCMC). You can also find articles by Fr. John Chakos about the Guatemalan communities on the blog of Pres. Alexandra Chakos.
John at 11:27:00 AM
Share
‹
›
Home
View web version