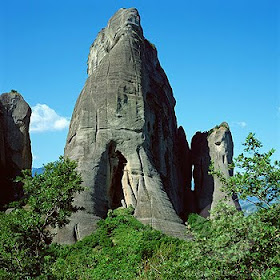 By John Sanidopoulos
I first travelled to Meteora when I was 15 years old with my mother and my grandmother. We only had a day and a half to visit all the monasteries there, so we hired a random taxi driver from neighboring Kalambaka to serve as our tour guide over our two day pilgrimage. The taxi driver was a very pious man, whose cab was decorated with many icons of saints, and he was very knowledgeable about all things Meteora. As we drove from one monastery to the next, one particular rock structure caught my eye that fascinated me. I asked the driver what it was. He told us that it was a prison for monks, where they repented for their sins. In my 15 year old immature imagination I thought of this as a place of punishment and exile. I imagined what life must have been like there, what sins would have brought them there, how they endured the harsh elements, how long they served their sentence, etc. It was a complete mystery, and to this day I never have come across any reliable texts concerning this prison of monks at Meteora, until recently after 21 years a speculation came to me that may not seem too improbable.
One of the most haunting and fascinating sections of The Ladder of Divine Ascent by St. John Climacus of Sinai is recorded in Step 5, where he talks about the repentance of the monks, whom St. John called "convicts", in a harsh secluded monastery known as "The Prison". When one reads this section, you could hardly believe that this was ever a real place, but St. John stayed at the Prison for a month, and recorded for us what he saw that made an extremely deep impression on him. 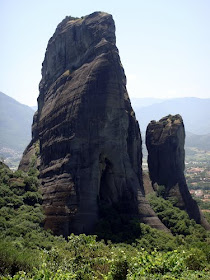 The Prison that St. John visited was where monks who had gravely sinned lived in extreme ascesis and gave extraordinary proofs of repentance, straining by their labors to receive God’s forgiveness. Far from appearing as extreme and intolerable, this Prison seemed rather to the Saint to be the model of monastic life: “A soul that has lost its one-time confidence and abandoned its hope of dispassion, that has broken the seal of chastity, that has squandered the treasury of divine graces, that has become a stranger to divine consolation, that has rejected the Lord’s command…and that is wounded and pierced by sorrow as it remembers all this, will not only take on the labors mentioned above with all eagerness, but will even decide devoutly to kill itself with penitential works. It will do so if there is in it only the tiniest spark of love or of fear of the Lord.”
If you have not read about the Prison described by St. John, I would encourage you to do so. It can be read here, between pages 29-34.
In 1959 Thomas Merton wrote a review for The Ladder of Divine Ascent in Jubilee magazine, where he praised it in many ways. However, he took exception to one section, and that was towards the chapter which describes the Prison. To him, it insulted his intelligence that St. John praised this form of asceticism and repentance, and he accused these monks of having various mental disorders. This proves that those who think according to the worlds standards and have distanced themselves away from the ascetical tradition of the Church and the way of the pious, see such things as utter follishness, insane, demented. 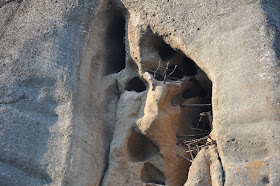 Regarding the prison for Monks at Meteora, which is known also as the Rock of the Holy Spirit, there are various traditions surrounding it with no positive identification. For example, we know that in the last half of the 18th century the Turkish-Albanians occupied this area and may have used it as a prison. In the beginning of the 19th century the Turks used the monasteries of Meteora as prisons and places of exile for punished clergy from Constantinople, but there is no record they stayed at the Rock of the Holy Spirit. In fact, no one knows if they were really ever prisons at all. It could have just been a place for ascetics to stay. But why call it a prison? There must be something to that tradition. Perhaps there was a certain resemblance to the way of life here that there was in the Prison described by St. John. It's all speculation, but a valid theory nonetheless.
John at 12:21:00 PM
Share
‹
›
Home
View web version