Isaiah's Prophecy of John the Forerunner 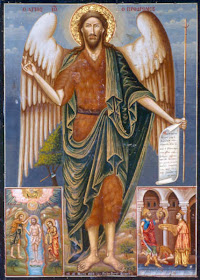 By St. Nikolai Velimirovich
"The voice of one that cries in the wilderness: Prepare ye the way of the Lord, make straight in the desert a highway for our God" (Isaiah 40:3).
When a king wants to visit a certain place, he sends before him in advance his heralds. To an unusual king an unusual herald is appropriate. The herald of Christ the King in the wilderness was Moses; in Jerusalem, the Prophets; in Nazareth, the Archangel; in Bethlehem, the Magi of the East; on the Jordan, John. Not one king in the history of mankind has had such heralds.
St. John the Baptist was also as unusual and special as were the other heralds of Christ. He was the voice crying in the two-fold wilderness: in the wilderness of Jordan and in the human wilderness. Just as the wilderness of Jordan was fruitless and dry, so the wilderness of the human spirit, was unfruitful and dry. John was not able to make the human wilderness green and fruitful, but he cleared and plowed it and, in that way, was preparing the earth and leveled it [the earth] for the great Sower Who, by His coming, brings with Him the seed and the rain to sow the seed of knowledge and the rain of grace from on high to make it green and be fruitful.
By repentance, John prepared the way and by baptism in water, made the path straight. The way and the paths these are the souls of men. By repentance, the souls of men were prepared to receive the seed of Christ and by baptism in water to bury that seed deep in the earth of their heart. The proud and the lowly when they are immersed naked in the water are all as one, equal in their nothingness before the majesty of the All-glorious Christ the Savior: "Every valley shall be exalted and every mountain and hill shall be made low" (Isaiah 40:4). The word here is not about earthly valleys and hills but of lowly and proud men. As corpses in the grave are all the same before the eyes of a living man, thus all sinners, lowly and proud, slaves and masters are equal before the living God.
Such a wondrous vision was seen by Isaiah, the son of Amos, the prophet of the living God, the one and true God.
O Lord, Heavenly King, to Whom the heavenly hosts worship day and night, look down once again upon our nothingness and because of Your humiliation and passion for us, save us. Amen.
John at 11:45:00 AM
Share
‹
›
Home
View web version