Musicians Who Are Converts to Orthodox Christianity

I am fairly often asked about certain famous people who are Orthodox Christians, and for most there is obscure information on the internet. There are many musicians who are Orthodox, in one form or another, especially those who were born into the Faith (one list is here). Questions usually revolve around converts however, and alleged converts. Here is some info I have come up with, to answer some of those questions.
1. Zac Hanson
Zac Hanson with his older brothers Isaac and Taylor formed the American pop rock band Hanson, and are best known for their 1997 hit song "MMMBop".
Zac is the nephew of Abbess Aemiliane (herself a convert) of the Exaltation of the Holy Cross Monastery in Thebes, Greece. Apparently he visited her there with his wife Kate, and soon after they decided to embrace Orthodoxy as a family in 2008, having previously been Evangelical. He is a member of an OCA parish.
Below are a few photos which show Zac and his family at a chrismation, and another of him participating in a procession: 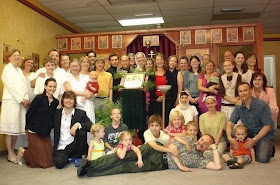 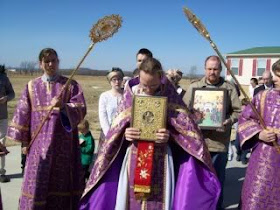 2. Dave Gahan
I have written on Dave Gahan of Depeche Mode at this link, and posted photos:
Dave Gahan of Depeche Mode A Convert to Orthodoxy
3. Chris Hillman
Chris Hillman was one of the original members of The Byrds and a member of the Rock and Roll Hall of Fame. They are one of the most successful and influential American pop/country rock groups from the 1960's; they recorded a string of hits, including "Turn! Turn! Turn!", "Eight Miles High" and "So You Want to Be a Rock 'n' Roll Star".
In a July 2003 interview with Triste, he says:
"I’m a member of the Greek Orthodox faith, having been an Evangelical Christian back in the 80’s, and then I converted to the Orthodox faith. Yeah, I’m very much devoted to that, but I don’t get in people’s face about it, or try and convert anybody! But it is my own personal belief with my family, and I sing in the Orthodox choir every Sunday - sing tenor - which is really Byzantine. Part of the liturgy that they do every week, and so it’s a completely different kind of music to what I do on stage, which is bluegrass. And even when we do Gospel stuff, it’s out of the old Baptist style, and Herb and I do old Gospel songs in our show. It’s really completely different. And then on Sundays when I’m in town, when I’m home, I sing these very old Byzantine hymns that you would hear in a monastery. But actually, both types of music embrace each other, if you follow me. I mean I get a lot out of the church singing as well as the other. And actually I get wonderful ideas from singing in a completely different style."
Read the rest of the interview here.
In fact, Chris was converted through his wife, Connie Pappas, who was born Greek Orthodox.
Kevin Allen did an interview with Chris Hillman in 2009 about his conversion, which can be heard or read here.
Read also here.
4. Chris Cornell
Chris Cornell is an American rock musician best known as the lead vocalist and rhythm guitarist for Soundgarden and former lead vocalist for Audioslave, as well as several solo works. He is especially known for his wide vocal range. Along with Alice in Chains, Nirvana, and Pearl Jam, Soundgarden became one of the most successful bands from Seattle's emerging grunge scene in the early 1990s.
Chris Cornell was raised Catholic and went to Catholic School (from which he was almost kicked out for asking too many questions), but upon marrying in 2004 to a Greek woman, Vicky Karayiannis, he converted to Orthodoxy through Chrismation. In his songs sometimes he appears to be anti-religious, but other times seems to embrace religion, so it is hard to tell how deep his Orthodoxy is. He does thank God in his liner notes for "Carry On", and the song "Light My Way" he has said was written like a prayer. "Holy Water", "Jesus Christ Pose" and "Blind Dogs" seem to be against hardcore religious fanatics, but his later songs do reflect a more spiritual side ("Say Hello 2 Heaven" and "Wooden Jesus", which some might say is sarcastic).

In this interview from 2007, he says about religion: "I don't really follow any particular one... I'm a free thinker and kind of open...." However, he does wear a cross necklace, he is a recent godfather (see photos here, where Chris and his wife even chanted), and he has had his children baptized Orthodox. In fact, his son was baptized by Greek singer Anna Vissi and Linkin Park singer Chester Bennington in 2009 at Saint Sophia Cathedral in Los Angeles, and he has expressed his desire to buy a house in Kolonaki, Athens (read here). He also recently paired with Greek actress Rita Wilson in her latest CD. 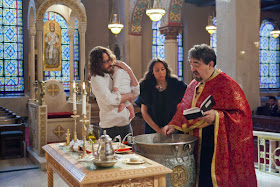 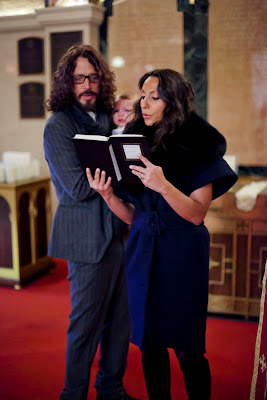 5. Chester Bennington
Chester Bennington is best known as the lead vocalist and co-songwriter of the rock band Linkin Park.
As mentioned above, Chester is the godfather of Chris Cornell's son who was baptized Orthodox, but I have no information as to whether he is himself an Orthodox Christian. They apparently are very close friends however (photo). Interestingly, the most famous album of Linkin Park is named "Meteora". The album was named after the Meteora rock formation in Greece. After seeing these monasteries on a trip to Europe, the band was inspired by the way they were built, almost defying gravity. It was this feeling of greatness and awesome accomplishment that Linkin Park wished to convey with their music, thus the name. Chester spoke of Meteora as follows: "It's got this otherworldly vibe about it, it had this really great energy, and I wanted to have a record that lived up to that energy." It is the most successful album in the history of the Modern Rock Tracks chart, a chart that specializes in radio play of alternative rock songs. As for his faith, it is unclear, but he has said: "I believe in God but I don't practice or preach or really discuss it outside of my own ideals." 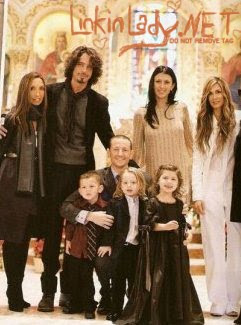 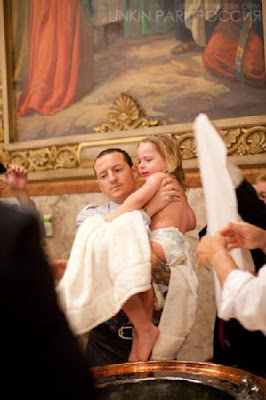 6. Eminem
Marshall Bruce Mathers III, better known by his stage name Eminem and by his alter ego Slim Shady, is an American rapper, record producer, songwriter and actor. Eminem is one of the best-selling artists in the world and is the best selling artist of the 2000s.
As far as him being Orthodox, this I think is an internet rumor which was spread after the release of his video "When I'm Gone" (see here) in 2005. At the 2:09 mark Eminem can be seen crossing himself from right to left, as Orthodox do, and because of this people say he is Orthodox. However, a close look will reveal that he is crossing himself with his left hand, and his fingers are not arranged in the Orthodox fashion. He's a left hander who just took to crossing himself. Pulling is just more "natural" than "pushing".
Conclusion:
There are more musicians that can be addressed, but these are the ones I get asked the most about. I do not have any acquaintance with any of them, so I really don't know where their heart is at. If anyone does have more info, please contact me and I will update the information.
John at 12:12:00 PM
Share
‹
›
Home
View web version