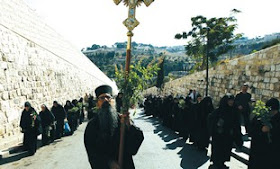 Greek Orthodox cleric was sued for punching haredi man who spat in his direction in 2008.

In a rare ruling, a judge in the Jerusalem Magistrate’s Court dismissed an indictment filed against a priest who punched a haredi yeshiva student in the face for having spat at him as he passed.

In June 2008, Greek Orthodox priest Martarsian was walking along The Armenian’s Street, in the Armenian Quarter of the Old City of Jerusalem, when the yeshiva student spat toward the ground in his direction.

The priest then punched the man in the face, causing him to bleed.

The priest did not dispute that he had punched the man, but asked that the indictment be dismissed in accordance with a clause in the law that allows for charges to be dismissed “if the indictment contravenes the essence of the principles of justice and fairness.”

Judge Dov Pollock said in his ruling last Tuesday that the court had heard evidence of daily incidents in which Christian clergy were spat upon by members of the ultra-Orthodox community, something which, the judge added, has been occurring for a number of years and which the police has not acted to prevent.

“Needless to say, spitting toward the accused when he was wearing the mantle of the church is a criminal offense,” the judge said.

Those who do this “hurt not only the people they spit at, but the image of our country, tourism and our values.”

The judge criticized the priest for taking the law into his own hands but said that it was equally deplorable that the authorities do not take the required action to uproot the phenomenon through prosecution and education.

“It is intolerable that a man of the Christian faith should be demeaned because of his religion, in the same way that it is for a Jew, Pollock said.

“The Jewish people experienced a long history of Christian anti-Semitism that brought great suffering to Jews and Judaism,” the judge continued.

“However, with the realization of the return of the Jewish people to sovereignty and independence, the state must strive not to look back but to establish a country that guarantees freedom of religion and worship to every religion, a state where every person is equal before the law without distinction of race or religion. These things are the cornerstone of the Declaration of Independence, and the rock of the foundation of Israel as a Jewish, Zionist and democratic state.”

The plaintiff told the court that he had not spat at the priest to degrade him but because he suffered from a medical complaint that caused him to produce a lot of saliva.

Pollock dismissed this argument owing to the fact that he had not produced any medical documentation to substantiate the claim, nor had he needed to spit during the duration of the court proceedings.

“The defendant is being prosecuted for having, in a single incident, punched a man who spat in front of him, after having suffered years of being spat at and demeaned while wearing the mantle of the church, and having never received any response from the authorities for this distress,” the judge said.

He ruled that the indictment represented a contravention of the principles of justice, for which he was dismissing the charges.

Shahar Ilan, vice president of Hiddush – For Religious Freedom and Equality, applauded the ruling and called on rabbis and leaders of the haredi community to denounce the phenomenon of members of their community spitting at Christian clergy.

“The haredi leadership has to understand that the fact that we have established a Jewish state brings responsibility, Ilan told The Jerusalem Post on Sunday.

“We have to prove that we don’t treat people from other religions as Jews were treated in the past. The idea that we came here and treated others as we were treated is simply insufferable.”

Rabbi Shlomo Riskin of Efrat, co-founder of the Center for Jewish-Christian Understanding and Cooperation, also welcomed the ruling.

“The crime this man committed by spitting at the priest was embarrassing him. This yeshiva student was in return embarrassed by having been struck by the priest, so I hope it was a lesson well learned for this particular yeshiva student,” Riskin said.

“The haredi community’s attitude to the Christian church stems from the pogroms carried out by Christians mobs against Jews in Europe for hundreds of years, incited by members of the Christian clergy, Riskin said.

“But times have changed and a whole new era of Jewish-Christian relations and understanding has dawned upon the world, and the haredim – and all Jews – should understand this and act accordingly.”
John at 11:49:00 AM
Share
‹
›
Home
View web version