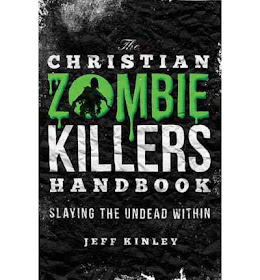 Every year Christians face a cultural dilemma, beautifully articulated by a 5-year-old boy's announcement to his parents upon returning home from school one day.

"Mom and Dad, Jesus hates Halloween!" Then, pausing, he mumbled, "But He likes it a little bit, doesn't He?"

And therein lies the conundrum of the Christ follower -- what to do with Halloween. Traditionally, Christians and anything related to the horror genre have not mixed well. Like oil and vinegar. Church and State. Alcohol and tattoos.

Some Christians even go so far as to claim Halloween is, in reality "Devil's Birthday." Really? Never mind the Bible doesn't say that. Note to self: File under "Christian Superstitions."

What that little boy was really trying to communicate was, "Mom and Dad, can I dress up like a pirate and get some candy this Friday night?"

But the dilemma remains concerning this perennial predicament. What are Christians supposed to do with the hoopla and festivities surrounding this evil holiday? Are we to ignore it? Pretend it doesn't exist? Lob "Gospel Grenades" of condemnation at those who celebrate it? Hand out religious pamphlets instead of candy to trick or treaters? Or offer an alternative, like a Harvest Festival, Fall Carnival or even "Reformation Day Celebration"?

Unfortunately, many people's only exposure to Christianity is when the "religious right" is condemning or complaining about something -- culturally or politically. However, that's changing in a lot of communities. Christians are waking up and engaging culture instead of merely vilifying it. The apostle Paul was a master at observing culture and redeeming it for God's purposes -- using customs, practices -- even idols and quotes from secular poets to illustrate biblical truth. While in Athens, he used a pagan Greek word for 'God' (theos) to build a verbal bridge communicating who the true God (Jehovah) was (Acts 17:23).

In reality, a lot of church members are huge fans of the horror genre in books and movies, and untold numbers wait with baited breath to catch the highly anticipated second season of AMC's The Walking Dead (or TiVo-ing it to watch after Sunday night Church).

Enter a new book: "The Christian Zombie Killers Handbook: Slaying the Living Dead Within." Officially releasing this week worldwide, the title is sure to arouse curiosity, combining two seemingly contradictory terms. I wrote this book, in part because I've always been a fan of the horror genre. But anther dilemma: how to reconcile that to my faith without compromising or stretching the truth?

As it turns out, that part was easy as zombies are a powerful metaphor paralleling a core theological truth. George Romero, legendary director and godfather of zombie films, has said, "I've always liked the monster within idea. I like the zombies being us."

Bingo, George. And that's precisely why zombies are so disturbing. We see a mirror of humanity when looking into their dark sockets. They're messy, smelly and they want to consume our flesh and brains. They don't go away just because you wish it so. They don't even stop chasing you when you shoot them, unless of course you shoot them in the head. They're just pure evil and you never know when they're going to lumber up behind you and bite a bloody hunk of meat out of your trapezoid muscle.

But back to the idea of "stinky Christians." The bite of this zombie metaphor cuts even deeper now. There's a spiritual parallel in their insatiable craving for self-satisfaction. The Bible describes this as the "old man" or "old self" (Rom 6:6), also commonly referred to as the "sin nature." It's the part of us that resists God and runs from Him. It even hates Him. It's the immaterial, mystical part of our soul that wants our own way over God's way. And though as Christians this evil entity has no legal authority over us anymore (Rom 6:6-11), we still feel it creeping up on us. Like, every day.

This creates tension. And confusion. And frustration. But Christianity typically avoids messiness. We don't like friction in our faith. We prefer order and predictability. Smooth sailing is our journey of choice. But God likes to throw a wrench in the gears every now and then, to challenge us. To get us to think. To engage. And to find new ways to live out faith our in the marketplace. In doing this, we Christians discover we aren't really any "better" than anyone else. This zombie inside us smells as putrid as any portrayed by Hollywood. And though we have accepted Christ's atoning sacrifice on our behalf (Col 1:13-14), we still struggle with many of the same temptations and sins as the rest of humanity (Rom 7:15-25). We become acutely aware of an inner beast that constantly moans and gnaws at our spirit.

"The Christian Zombie Killers Handbook" offers escape, survival and a win over the zombie inside. This book shows you how to slay the living dead within. With its unique blend of fiction, graphic novel inspired illustrations, and spiritual guidance, it delivers a fresh, relevant look at the doctrines of sin, grace, salvation and the inner conflict we all face.

In the end, this annual Fall dilemma is much deeper than culture, Halloween, TV shows and trick or treating. The real issue is "What do I do with this rotting corpse?"
John at 10:47:00 AM
Share
‹
›
Home
View web version