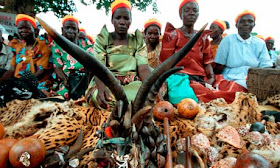 MARK COLVIN: A week ago, the BBC broadcast a shocking story from Uganda about widespread child sacrifice. As a result of an undercover investigation, it said many cases were not being followed up by the police, and little was being done to protect potential victims.

The reporters spoke to a witch doctor who offered to kill a child for them to bring luck to a construction project.

Peter M Sewakiryanga is director of Kyampisi Childcare Ministries in Uganda, which helped with the investigation.

He's in Australia to draw attention to the child sacrifice problem, and he spoke to me this afternoon.

PETER M SEWAKIRYANGA: Many people in Uganda have come to believe that when you sacrifice a child to evil spirits you get blessings, you get wealth, you get protection of some kind.

And there are many people involved in witchcraft, who are called witch doctors, who have been going on telling people that you need to sacrifice to be able to succeed in life.

MARK COLVIN: How many children get kidnapped and used in this way?

PETER M SEWAKIRYANGA: Last year we had reports of over 9,000 children (inaudible) lost and that is based on the United States human rights report. And unfortunately the most number of these children never get to be found and it's been come to our attention that most of them have been victims of child sacrifice.

Because people do it in such secrecy, it's very hard to find them dead until you find decapitated bodies of children with ritual stuff that is around them; others are castrated for ritual, you know castrated completely, others are mutilated, others are just cut heads off and remove body organs out of their bodies, and others you will never find them.

We did an investigation with the witch doctors, an undercover investigation, and we found out that 100 per cent of all those involved in witchcraft are willing to give child sacrifice as the best remedy for a problem that is going to bring success to business, it's going to protect business.

MARK COLVIN: So the people who buy this service, they think they're going to get good luck and good health, do they?

And the rich people want also to protect their wealth.

MARK COLVIN: Uganda is in many areas a Christian country. Are these people both practising both Christianity and witchcraft sort of side by side?

PETER M SEWAKIRYANGA: You will find that the biggest, we have a very, very big number of people that believe in witchcraft. Uganda is …

MARK COLVIN: So it's possible to go to church on Sundays and believe in witchcraft the other days of the week?

PETER M SEWAKIRYANGA: Most people that are practising witchcraft don't believe in god.

MARK COLVIN: Has this been happening for a long time or is it a relatively new phenomenon?

MARK COLVIN: It's an extraordinary phenomenon because Uganda during that period has been growing quite fast and people have a lot more technology, mobile phones, computers, that sort of thing.

It's extraordinary to imagine that witchcraft should be so strong in those circumstances.

PETER M SEWAKIRYANGA: Yeah we have heard also foreign people coming into the country like from Tanzania. Those people that believe in the killing of albinos, that they'll get wealth.

And so any witch doctor that crosses from Tanzania to come to Uganda, they are allowed to announce on radios that they are going to offer the best spiritual power.

MARK COLVIN: They're allowed to advertise on the radio?

PETER M SEWAKIRYANGA: Yes, they are allowed to advertise on the radio.

PETER M SEWAKIRYANGA: No, no, no to offer evil spiritual success or solutions to problems and once people go there is when they are brought into the practice of child sacrifice.

MARK COLVIN: So you're campaigning against it in Uganda, what are you hoping for by campaigning here? What can Australians do?

PETER M SEWAKIRYANGA: Back in Uganda we have tried to ask the government to look up the child protection laws. We have asked the government to bring all pending cases in court to a logical conclusion so that justice can prevail.

But that has not happened and why we are making this an international campaign is to ask people to sign petitions, to show the government that the whole world is behind this campaign, is asking you to bring all these pending cases in court to a logical conclusion, to ask the government to look at the child protection laws.

They can look at them and this petition to help bring justice and protect children.

MARK COLVIN: Peter Sewakiryanga, director of Kyampisi Childcare Ministries in Uganda. If you're interested in that petition he was talking about you'll be able to see it at www.kyampisi.org or www.jubileecampaign.co.uk.

To see how Christians are battling against child sacrifice in Uganda, see this video.
John at 2:04:00 AM
Share
‹
›
Home
View web version