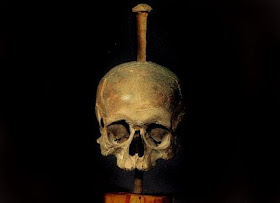 Saint Mercurius of Smolensk is an Orthodox Saint who is said to have walked after his head was decapitated. A legendary story of St. Denis also says the same. The latter is a mock story told by Voltaire in La Pucella d'Orleans. Dostoevsky, to undermine the authority of Voltaire, mentions this tale in The Brothers Karamazov through the mouth of the dissolute Fedore Karamazov (Part 1, Book 2, Chapter 2). He asks Elder Zosima: "Is it true, great Father, that the story is told somewhere in the Lives of the Saints of a holy saint martyred for his faith who, when his head was cut off at last, stood up, picked up his head, and, 'courteously kissing it,' walked a long way, carrying it in his hands. Is that true or not, honoured Father?" Zosima denies the veracity of the story, but maybe it is the detail of the 'courteously kissing it,' that he in fact denied.

Historically, there are many stories of severed heads surviving for minutes after an execution, but only one headless body that stood up and took a stroll - on October 20th 610 years ago.

When the feared pirate Klaus Stortebeker faced his executioners in Hamburg, Germany, he struck a strange last minute deal: If, after his beheading, his headless body could walk, however many of his 70 captive men he made it past would be freed. It was agreed, and then he was executed.

Then, according to legend, his corpse got up and walked past eleven of his men, before the executioner tripped him. Deal or no deal, all of the pirates were murdered that day, their skulls impaled and displayed as a waring to others.

In 1898 the mass grave of the pirates was unearthed during construction, and the skull believed to be that of Stortebeker was donated to the Hamburg Museum where it has been on display since 1922. Last year the famous skull went missing, stolen from its display cabinet. After a desperate search and many false leads, the skull was finally discovered and returned earlier this year, impaled to avoid being taken.
John at 8:42:00 AM
Share
‹
›
Home
View web version