Commemoration of an Anonymous Confessor 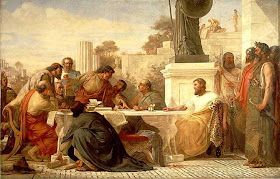 According to St. Nikodemos the Hagiorite, on October 31st the Orthodox Church remembers the anonymous Confessor who suffered for the Faith during the reign of Julian the Apostate (361 AD). He was the son of a priest of the idols which a pious Christian deaconess, a friend of his mother, helped bring to the true Faith. Initially his father, upon hearing of his conversion, tortured him to renounce Christ. He miraculously survived, and when Julian died he managed to convert his elderly father to Christ. Having climbed the ladder of spiritual perfection, he died in peace.
The original source of this story is taken from the "Ecclesiastical History" of Theodoret (Bk. 3, Ch. 10), cited below:

A young man who was a priest's son, and brought up in impiety, about this time went over to the true religion. For a lady remarkable for her devotion and admitted to the order of deaconesses was an intimate friend of his mother. When he came to visit her with his mother, while yet a tiny lad, she used to welcome him with affection and urge him to the true religion. On the death of his mother the young man used to visit her and enjoyed the advantage of her wonted teaching. Deeply impressed by her counsels, he enquired of his teacher by what means he might both escape the superstition of his father and have part and lot in the truth which she preached. She replied that he must flee from his father, and honor rather the Creator both of his father and himself; that he must seek some other city wherein he might lie hidden and escape the violence of the impious emperor; and she promised to manage this for him. "Then", said the young man, "henceforward I shall come and commit my soul to you."

Not many days afterwards Julian came to Daphne, to celebrate a public feast. With him came the young man's father, both as a priest, and as accustomed to attend the emperor; and with their father came the young man and his brother, being appointed to the service of the temple and charged with the duty of ceremonially sprinkling the imperial viands. It is the custom for the festival of Daphne to last for seven days. On the first day the young man stood by the emperor's couch, and according to the prescribed usage aspersed the meats, and thoroughly polluted them. Then at full speed he ran to Antioch, and making his way to that admirable lady, "I have come", said he, "to you; and I have kept my promise. Do you look to the salvation of each and fulfill your pledge." At once she arose and conducted the young man to Meletius the man of God, who ordered him to remain for awhile upstairs in the inn.

His father after wandering about all over Daphne in search of the boy, then returned to the city and explored the streets and lanes, turning his eyes in all directions and longing to light upon his lad. At length he arrived at the place where the divine Meletius had his hostelry; and looking up he saw his son peeping through the lattice. He ran up, drew him along, got him down, and carried him off home. Then he first laid on him many stripes, then applied hot spits to his feet and hands and back, then shut him up in his bedroom, bolted the door on the outside, and returned to Daphne.

So I myself have heard the man himself narrate in his old age, and he added further that he was inspired and filled with Divine Grace, and broke in pieces all his father's idols, and made mockery of their helplessness.

Afterwards when he bethought him of what he had done he feared his father's return and besought his Master Christ to nod approval of his deeds, break the bolts, and open the doors. "For it is for your sake", said he, "that I have thus suffered and thus acted. Even as I thus spoke," he told me, "out fell the bolts and open flew the doors, and back I ran to my instructress. She dressed me up in women's garments and took me with her in her covered carriage back to the divine Meletius. He handed me over to the bishop of Jerusalem, at that time Cyril, and we started by night for Palestine."

After the death of Julian this young man led his father also into the way of truth. This act he told me with the rest. So in this fashion these men were guided to the knowledge of God and were made partakers of Salvation.