Was Jesus Ignorant of the Time of His Second Coming? 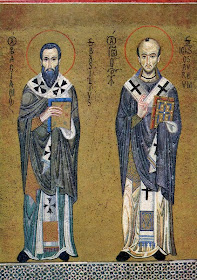 St. Basil's response can be read in a letter to St. Amphilochios of Iconium (Letter 236), where he adamantly states that Jesus was in fact not ignorant of His Second Coming. First, he states that the opinion that Jesus was ignorant of His Second Coming has its origins from the heretics, and that the tradition he received from his youth and by all Orthodox Christians is that Jesus was in fact not ignorant. Second, he shows how to properly interpret these passages of Scripture. He puts forward Mark 10:18 where Jesus says that "there is none good but one, that is, God." He explains that this does not exclude that Jesus is good, but rather indicates that God the Father is the first good. Also in Matthew 11:27, where Jesus says, "No one knows the Son but the Father", we are not to believe that the Holy Spirit is ignorant of the Son, but rather that to the Father naturally belongs the first knowledge. St. Basil also puts forward other passages of Scripture where Jesus talks about knowing when His Second Coming will be, such as Matthew 24:6. He further brings forward the fact that Jesus as man often spoke of Himself in human terms and weaknesses, but that as God He possessed the "wisdom and power of God" (1 Cor. 1:24).

It should also be pointed out that most Byzantine texts of the Gospels do not contain the words "nor the Son" in Matthew 24:36. It seems that this was added to the text of the Gospel of Matthew based on the text that does contain it, in Mark 13:32. This is a debatable issue why this is so, but St. Basil refers to this fact when he shows that though Mark does seem to indicate an ignorance of the Son, Matthew does not. St. John Chrysostom, in a rare exception, adds "nor the Son" in Matthew. For Basil, this indicates that the words "but My Father only" are offered in contradistinction to the angels and men, but not the Son. Rather, Matthew more clearly shows that the Father has first knowledge by nature, whereas the Son has knowledge through the Father. Otherwise there would be a contradiction here with John 16:15, where Jesus says: "“All things that the Father has are Mine." John 10:15 also states clearly: "As the Father knows Me even so know I the Father."

St. Basil clarifies Mark 13:32 when he says that it should be read in the following manner: "Of that day and of that hour no man knows, nor the angels of God; but even the Son would not have known if the Father had not known, for the knowledge naturally His was given by the Father." Keeping in mind that the knowledge and divinity of the Son comes from the Father, this passage is much more clearly understood.

According to St. John Chrysostom in his Homilies on the Gospel of Matthew, the reason Jesus seems to indicate ignorance in this passage was so that the disciples may not even entertain the thought of inquiring into the matter. Though Jesus does know the time of His Second Coming, He is pointing out here a greater mystery, that the source of this knowledge comes from the Father and through the Father is given to the Son. But since the disciples do not yet understand this relationship between the Father and the Son, to them it is merely an indication to not further inquire into the matter. It appeared to them that the Son was ignorant so that they not feel scorned by Jesus or perplexed why they were not given knowledge He possessed. Thus, by Jesus saying "nor the Son", He was indicating to the disciples that He is indeed honoring them and has concealed nothing from them, but that knowledge of the Second Coming would be more harmful to them rather than beneficial. Meanwhile, St. John clearly indicates that the time of the Second Coming is perfectly known by the Father, the Son and the Holy Spirit; for the Holy Trinity, Who created heaven and earth, created time as well. Mankind has no need to know neither the time of the judgment, nor how the Son will judge.

St. John Chrysostom puts the following words into the mouth of Jesus to explain this further: "For that indeed I am not ignorant of it [the Second Coming], I have shown by many things; having mentioned intervals, and all the things that are to occur, and how short from this present time until the day itself (for this did the parable of the fig tree indicate), and I lead you to the very vestibule; and if I do not open unto you the doors [of knowledge], this also I do for your good."

St. John even shows how Jesus speaks specifically of knowing the day and hour of His coming when He speaks of His coming suddenly and unexpectedly in the verses following Matthew 24:36.

We can thus conclude that according to the patristic tradition of the Church, Jesus is not nor ever was ignorant of the time of His Second Coming.