The Basilica di Santa Croce in Gerusalemme In Rome 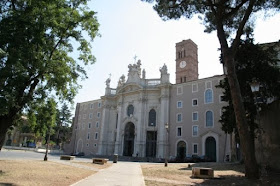 The Basilica di Santa Croce in Gerusalemme (Holy Cross in Jerusalem) is one of the seven pilgrimage churches in the Eternal City of Rome.

The Church of the Holy Cross is located on a Roman imperial estate and is built into part of the Sessorian Palace. Several sources, including an inscription in the church, verify that the Sessorian Palace was owned by the empress St. Helen (c.255-330), Constantine's mother.

As a place of worship it began as a hallway in St. Helen's home. She then had a proper chapel built, in part to house the many Christian relics that she brought back from the Holy Land, including thorns purportedly taken from Christ's crown, fragments of the cross on which he was crucified and a nail used in the crucifixion. The church owes its name to some soil that Helena brought back from Jerusalem and which originally covered the floor of the church.

From the end of the 4th century it was said that St. Helen had made a pilgrimage to the Holy Land, during which she discovered the True Cross on which Christ was crucified and many other relics. It was also said that she wished to set up a shrine in Rome for pilgrims who could not travel to Jerusalem.

Historical evidence is scarce on this, as no early writers record a connection between Helen and the True Cross. Fragments of the cross, however, were circulating in the West by 348 AD. The earliest historical record of the church, dated to 501 AD, refers to it as "Hierusalem basilica Sessoriani palatii." Architecturally, it is notable that the 4th-century Chapel of St. Helen is quite similar in design to a martyrium that was erected by Constantine in Jerusalem to house a fragment of the True Cross.

The history of the church was first explicitly recorded in a 6th-century passage in the Liber Pontificalis, which states that Emperor Constantine (306-37) founded "a basilica in the Sessorian Palace" and that it received many donations. The church was not referred to as "Holy Cross" until the Middle Ages.

However, the church's connection with St. Helena remains firm. The Chapel of St. Helena, which is held to be the empress's private chapel in the Sessorian Palace, was decorated with mosaics by Emperor Valentinian III (425-455), his mother Galla Placidia and his sister Honoria.

Within a few centuries, the area around the chapel had become isolated from the rest of the city. It was maintained by the clergy of the Lateran but by the 8th century had fallen into quite a poor state. Restorations were made under Pope Gregory II (715-31) and again in 1145, as part of an ongoing papal effort to revive the Lateran area. 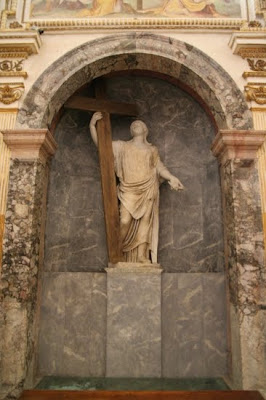 In the 12th century, the chapel was rebuilt as a Romanesque basilica (the Cosmatesque pavement and bell tower date from this period), which was referred to as Sanctae Crucis (the Latin equivalent of the Italian Santa Croce) - indicating a relic of the True Cross was enshrined there.

While the papacy was based in Avignon in the 14th century, the church was abandoned. But in 1370, shortly before the papacy returned to Rome, Pope Urban V handed it over to Carthusian monks, who restored the church.

In 1492, a dramatic discovery was made in the course of repairs to a mosaic: a brick inscribed with the words TITULUS CRUCIS (Title of the Cross). Sealed behind the brick was a fragment of an inscription in wood, with the word "Nazarene" written in Hebrew, Latin and Greek. This Title is mentioned in all four Gospel accounts:

It is not known how the relic came to the church or who placed it behind the brick, but one possibility is that it was hidden in the wall around 455, when the clergy needed to protect it from the attacking Visigoths.

Regardless of its history, the Title was a highly important discovery. Unlike the cross and the nails of the Crucifixion, there was no previous tradition of the existence of the Title of the Cross. The discovery gave the church renewed importance and resulted in increased building activity and restoration of the church. (On the relic's authenticity, see the listing of all the relics in "What to See," below.)

In 1561, Lombard Cistercian monks from the congregation of San Bernardo replaced the Carthusians as caretakers of Santa Croce. Cistericans still serve the church today. Between 1741 and 1744, Pope Benedict XIV had the Church of the Holy Cross rebuilt in the opulent Baroque style. The architects were Domenico Gregorini and Pietro Passalacqua. The long-planned roads linking Santa Maria Maggiore, San Giovanni in Laterano and Santa Croce in Gerusalemme were finally completed at this time.

In 1930, the relics enshrined in the Chapel of St. Helen were moved to a new chapel upstairs, the Chapel of the Holy Relics. The chapel is reached by a wide stairwell flanked by the Stations of the Cross, also dating from 1930. The stairway and its decoration has a definite Mussolini-era feel to it. 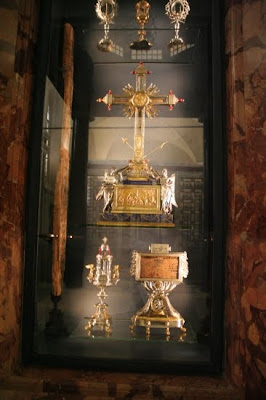 The relics enshrined at Santa Croce in Gerusalemme in the Chapel of the Holy Relics are:

1. A large fragment of the Good Thief's cross;

2. The bone of an index finger, said to be the Incorruptible Finger of St. Thomas that he placed in the wounds of the Risen Christ.

3. A single reliquary containing small pieces of: the Scourging Pillar (to which Christ was tied as he was beaten); the Holy Sepulchre (Christ's tomb); and the crib of Jesus.

4. Two thorns from the Crown of Thorns. It is said that the plant from which these came cannot be identified.

5. Three fragments from the True Cross.

6. One nail used in the Crucifixion. Far more than the original three nails are venerated around the world; several popes openly cast copies that contained filings from those believed to be the originals.

7. The Title of the Cross, discovered in the church in 1492. The fragment shows the word "Nazarene" written in Hebrew, Latin and Greek. 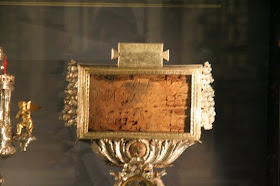 The Title was long thought to be a medieval forgery, especially since there was no previous tradition of the existence of such a relic. But in the 19th century another important discovery was made: the travelogue of the Spanish pilgrim Egeria, who traveled to the Holy Land in the late 4th century. Egeria described the veneration of the Title relic at Jerusalem. Further indication that it is not a forgery is the fact that not only the Hebrew, but also the Latin and Greek script is written from right to left. This suggests the inscription was made by a Hebrew accustomed to writing in that direction, not a medieval Latin-speaker.

In a side room in the Chapel of the Holy Relics is another fascinating sight: a full-sized, exact replica of the Shroud of Turin. It is stretched out on the wall at eye level and well-lit, providing a rare opportunity to inspect the famous relic up close. In the corner of the room stands a gory statue of Jesus that was designed based on the portrait in the Shroud. 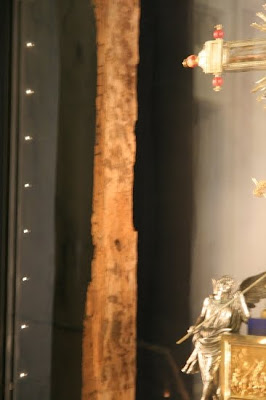 The largest relic in the Chapel of the Relics is this large piece of the cross of the Good Thief, to whom Christ said, "Today you will be with me in Paradise."


The monastery adjoining the church was occupied by Cistercian monks for nearly 500 years, until the recent scandal involving liturgical "irregularities", financial impropriety and "lifestyles not in keeping" with Church doctrine.