Verses
A voice crying out from the innermost part of the earth,
With the striking of the earth, the sound goes forth to all in an unusual way.
On the twenty-fifth the Head of the Forerunner was found.
The Third Finding of the Honorable Head of the Holy Prophet, Forerunner and Baptist John occurred around the year 850 (see the account of the First and Second Discoveries on February 24). The head of Saint John the Forerunner had been found in the city of Emesa in Syria the second time and transferred to Constantinople. In an encomium of Saint Theodore the Studite, we are informed that in the early ninth century either a portion or the entire head of the Honorable Forerunner was in the Studite Monastery. 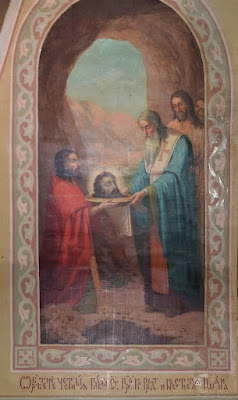 The head was transferred to Comana of Cappadocia during the Saracen raids (about 820) and it was hidden in the ground during a period of iconoclastic persecution. When the veneration of icons was restored, a priest saw in a vision the place where the head of Saint John the Forerunner was hidden. Patriarch Ignatios (847-857) communicated this to the emperor Michael, who sent a delegation to Comana. There the head was found a third time in a silver reliquary at a sacred place around the year 850.

Afterwards the head was again transferred to Constantinople, on May 25th, it was met with great solemnity by the emperor, the patriarch and all the people, and it was placed in a chapel at the imperial court. 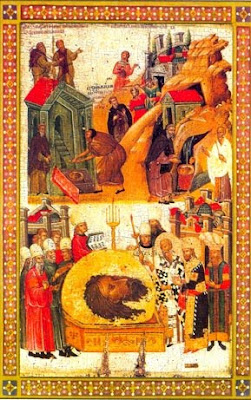 Apolytikion in the Fourth Tone
Christ God hath revealed to us thy truly ven'rable head as a divine treasure that had been concealed in the earth, O Prophet and Forerunner. Wherefore, as we gather on the feast of its finding, with our hymns inspired of God, we praise Christ the Saviour, Who by thy mighty prayers saveth us from every kind of harm.

Kontakion in the Second Tone
Since we have obtained thy head as a most sacred rose from out of the earth, O Forerunner of grace divine, we receive sure healing in every hour, O Prophet of God the Lord; for again, now as formerly, thou preachest repentance unto all the world.

Kontakion in Plagal of the Second Tone
The shining pillar on earth, the Forerunner, lamp of the spiritual Sun, has revealed his radiant, holy head to the world. He sanctifies those who venerate it and who faithfully cry: O wise Baptist of Christ, save us all.