The Monastery of Saint Theodosia In Constantinople 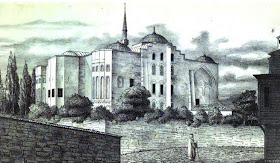 On January 19, 729, at the very beginning of the iconoclastic persecutions, Emperor Leo III the Isaurian ordered the removal of an image of Christ which stood over the Chalkē Gate, the main gate of the Great Palace of Constantinople. While an officer was executing the order, a group of women gathered to prevent the operation, and one of them, a nun named Theodosia, let him fall from the ladder. The man died, and Theodosia was captured and executed.

After the end of Iconoclasm, Theodosia was recognized as a martyr and saint, and her body was kept and venerated in the Church of Saint Euphemia in the Petrio, in the quarter named Dexiokratiana, after the houses owned here by one Dexiokrates. The church and adjoining monastery were erected by Emperor Basil I at the end of the ninth century. The monastery hosted his four daughters, who were all buried in the church. Saint Euphemia lay near the Monastery of Christos Evergetēs, whose foundation date is unknown. It is only known that it was restored by protosevastos John Komnenos, son of Andronikos I Komnenos and brother of co-emperor John, who died fighting in the battle of Myriokephalon in 1176. On April 12, 1204, during the Fourth Crusade, the Latin fleet gathered in front of the Monastery of the Evergetes before attacking the city. During the Latin Empire, the navy had its anchorage in front of the monastery, and the naval port was kept there by Michael VIII Palaiologos also after the restoration of the Byzantine Empire. Many sacred relics kept in the church were looted by the Crusaders and many still exist in churches throughout western Europe. 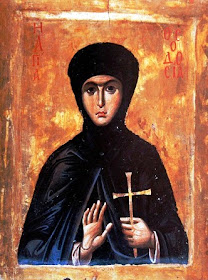 The veneration of St. Theodosia grew with time until, after the 11th century, the church was named after her. Since the original feast day of the founding of the Church of Saint Euphemia occurred on the 30th of May, and that of another Saint Theodosia of Tyre occurred on the 29th of May, finally this day became the feast day of Saint Theodosia of Constantinople, which had previously been celebrated on July 18th.

Saint Theodosia became one of the most venerated saints in Constantinople, being invoked particularly by the infirm. The fame of the Saint was increased by the recovery of a deaf-mute in 1306. The church is often mentioned by the Russian pilgrims who visited the city in the fourteenth and early fifteenth century, but sometimes it is confounded with Christ Evergetēs, which, as already said, stood near it. Twice a week a procession took place in the nearby roads. In that occasion the relics hosted in the church were carried along, followed by a great crowd of sick people praying for their recovery.

The church is mentioned for the last time on May 28, 1453. On that day, which was the eve both of the Saint's feast and also of the end of the Byzantine Empire, the Emperor Constantine XI with the Patriarch went to pray in the church, which was adorned with garlands of roses. Afterward Constantine left for the last struggle. Many people remained all the night in the church, praying for the salvation of the city. In the morning the Ottoman troops, after entering the city, reached the building, still adorned with flowers, and captured all the people gathered inside, considering them as prisoners of war. The relics were thrown away and the body of Saint Theodosia was cast to the dogs.

Some years later (in 1490), the ruined church was repaired and converted into a mosque. A minaret was erected between 1566 and 1574, under Selim II, by Hassam Pasha, a supplier of the Ottoman navy. Afterwards the mosque was often named after him. Between 1573 and 1578, during his sojourn in Istanbul, the German preacher Stephan Gerlach visited the mosque, identifying it with the church of Hagia Theodosia.

Today it is known as Gül Mosque (Turkish: Gül Camii, meaning: "The Mosque of the Rose"). The building is located in Istanbul, in the district of Fatih, in the neighborhood of Ayakapı ("Gate of the Saint"), along Vakif Mektebi Sokak. It lies at the end of the valley which divides the fourth and the fifth hills of Constantinople, and from its imposing position it overlooks the Golden Horn.