The Icon of Christ At the Chalke Gate 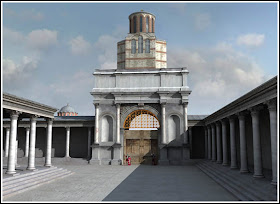 The Chalke Gate (Greek: Χαλκῆ Πύλη), was the main ceremonial entrance (vestibule) to the Great Palace of Constantinople in the Byzantine period. The name, which means "the Bronze Gate", was given to it either because of the bronze portals or from the gilded bronze tiles used in its roof. The interior was lavishly decorated with marble and mosaics, and the exterior façade featured a number of statues. Most prominent was an icon of Christ which became a major iconodule symbol during the Byzantine Iconoclasm, and a chapel dedicated to the Christ Chalkites was erected in the 10th century next to the gate. The gate itself seems to have been demolished in the 13th century, but the chapel survived until the early 19th century.

Above the main entrance of the Chalke, there stood an icon of Christ, the so-called Christ Chalkites ("Christ of the Chalke"). The origins of the icon are obscure: based on its mention in the Parastaseis, it may have existed by ca. 600, but it cannot be stated with any certainty. Its prominent display on the very entrance to the imperial palace made it one of the city's major religious symbols. Consequently, its removal, in 726 or 730, by Emperor Leo III the Isaurian (r. 717–741), was both a major political statement and a spark for violent rioting in the city, and marked the beginning of the official prohibition of icons in the Empire. The icon was restored a first time by Empress Irene in ca. 787, until it was again removed by Leo V the Armenian (r. 813–820) and replaced by a simple cross. After the definitive restoration of the veneration of icons in 843, a mosaic icon by the famed iconodule monk and artist Lazaros replaced it.

The exact appearance of the icon is unclear: although the early image has been interpreted as a bust of the Christ Pantocrator type, and late Byzantine references, such as coins by John III Vatatzes (r. 1221–1254) and the Deesis mosaic in the Chora Church, use the term for depictions of a standing Christ on a pedestal. 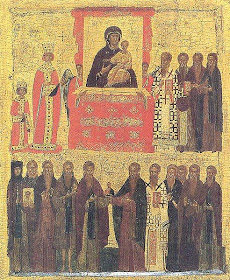 Icon celebrating the "Triumph of Orthodoxy" and the restoration of icon veneration in 843. Saint Theodosia, an iconodule martyr celebrated on May 29th, is depicted first left on the lower row, carrying the icon of Christ Chalkites. When the icon was being removed by a soldier of Emperor Leo the III, she knocked down the ladder with him on it which killed him. For this she was arrested and martyred. She was soon venerated as a martyr and became known as a miracle worker.