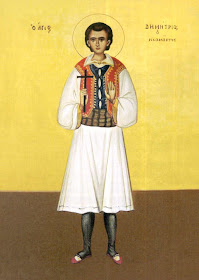 St. Mitros of Theisoa (Feast Day - May 28)
Saint Mitros (or Demetrios) of Peloponnesos, originated from Theisoa and was raised in a devout and virtuous family. However, at about eleven years of age he was converted to Islam, very likely as part of the suppression of rebellion in the Peloponnese in 1769 by the Turks. His Christian name was Demetrios, but when he became a Muslim he was named Mustafa.

Gifted with intelligence and wisdom, he quickly became well known amongst the most eminent Turks of the Peloponnese and rose in office to the position of sub-prefect. His many contacts and productivity also resulted in his acquisition of many riches and servants. Despite these riches and glory he was deeply dissatisfied with his situation and his young gullibility into being deceived into Islam and he wished to return to the faith of his parents. He went to the town of Tripolis, sold all his possessions, returned to his relatives and was brought back to the Christian Church through confession, repentance and spiritual guidance. He also shaved off his beard, since at that time in Tripoli the Muslims wore beards, and it was forbidden for Christians. Dimitrios lived for another ten years as a devout Christian. 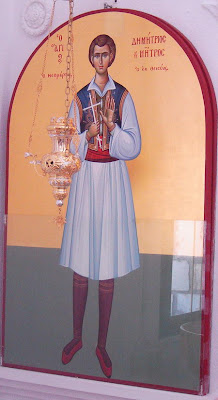 His Christian life became known to the Turks, and while he was at Mystra he was recognised, captured and taken to the pasha of Tripolis on charges of converting back to Christianity. The pasha pointed out the many benefits of office and wealth that he owed to the Turks and made many attempts to make him denounce his faith, however Demetrios remained steadfast, declaring that he would rather die for his faith. He was imprisoned and after a few days, following further futile attempts to convert him, he was charged as an offender against Islam and executed by beheading on 28 May 1794, which was Pentecost Sunday. His last words to his fellow Christians at his execution were the following: "I am one of you. Demetrios is my name. Therefore entreat the Lord on my behalf."
He was buried with honor and respect by the Christian community at the Church of St Demetrios the Great-Martyr in Tripolis, now named after Saint Mitros. 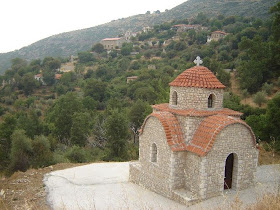