Historic Visit of Ecumenical Patriarch To Smyrna and Ephesus 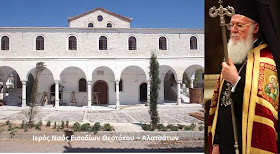 Ecumenical Patriarch Bartholomew is to carry out a historic visit to the city of Smyrna between Friday and Sunday (May 27-29, 2011), during which he will lead a Vespers Service at the Church of the Entrance Into the Temple of the Theotokos in Alacati on Saturday.

This will mark the first time that a Patriarch leads a Service in Alacati in 90 years, since the disastrous outcome of the Asia Minor catastrophy in 1922 that resulted in the expulsion of the majority of the area's sizeable Greek community during the population exchanges of the Lausanne Treaty. In 1895 Alacati had a population of 13,845 Rum Orthodox and only 132 Muslims. After 1922 many of the Rum settled in Chios.

The church had been converted to a mosque in 1938 (the minaret built in 1953) but recently stopped being used for that purpose and was officially declared a historic monument of Turkey and quickly restored, revealing many secrets. It was originally built in 1821, though restored in 1833 to its present form after a fire. The architect and builder of the church, Stratos Kalonaris together with his son Manolis, has built many churches in the Cyclades, including the famous Church of the Panagia in Tinos. The church was built within one year in 1833. It used to celebrate its feast on November 21 by the locals before 1921, which included pilgrims from the nearby Aegean islands.

On Sunday a Patriarchal Divine Liturgy will take place at the Church of Saint Photini in Ephesus.