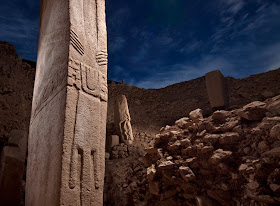 For years, historians, archeologists, anthropologists and pretty much all of the other "ologists" have agreed that agriculture created civilization, including religion, as we have known it for the past 12,000 to 15,000 years. The assumption was that settling down to lives of farming, people built cities, created art and made up organized religions to suit the new needs they faced in the transition from hunter-gathers to farmers. Or not.

New evidence suggests that it was not agriculture which created civilization, but religion. The June issue of National Geographic offers a brief and provocative story from a place in Turkey known as Göbekli Tepe, site of the world's oldest example of monumental architecture i.e. a temple. [Read article here]

While the interpretation of archeological remains is often as much art as it is science, there is plenty of reason to believe that in Gobekli Tepe people's need/desire to gather for worship is what created civilization, not the reverse, as was previously assumed. The Temple existed without a city.

At the time of Göbekli Tepe's construction much of the human race lived in small nomadic bands that survived by foraging for plants and hunting wild animals. Construction of the site would have required more people coming together in one place than had likely occurred before. Amazingly, the temple's builders were able to cut, shape, and transport 16-ton stones hundreds of feet despite having no wheels or beasts of burden. The pilgrims who came to Göbekli Tepe lived in a world without writing, metal, or pottery; to those approaching the temple from below, its pillars must have loomed overhead like rigid giants, the animals on the stones shivering in the firelight -- emissaries from a spiritual world that the human mind may have only begun to envision.

That human minds, at least some of them, envision things ahead of what is physically possible and respond to impulses which are driven by more than physical needs is not only wonderful, it demonstrates that religion is more than what typical utilitarians suggest. It also does so without having to buy into theologies which many people reject.

The choice is not necessarily to view religion as a low level response to changed physical circumstances on the one hand, or as the gift of supernatural beings who live in the skies above or in the depths below on the other. That dichotomy, like most dichotomies, is false. At least that is the evidence suggested by the remains at Gobekli Tepe.

The evidence from Turkey suggests that the pilgrimage impulse, the collective worship impulse, the sacred space impulse, are all supra-natural, if not super-natural. There is something within us, not necessarily from outside us, which compels the building of Gobekli Tepe and places like it. That "something" is not simply accounted for by the usual explanations which seek to explain, or, too often, explain away, people's attachment to religious expression.

That conclusion, if correct, means that religion needs to be taken a whole lot more seriously by many of the people who read this section, especially those among them who constantly insult the religious impulse. It also means that those who assume that religion belongs to one group, one understanding of God or Gods or one particular scripture, would do well to practice more modesty about such claims.

The evidence from Gobekli Tepe suggests that religion is both more real, and more human, than is often admitted. The ultra-orthodox in both camps in the ongoing debate about what religion "really is," where it came from and what purposes it serves may find this difficult to accept.

Of course, the assumption that something cannot be both deeply religious and deeply rooted in human impulse and capacity, may be one of the idols which need to be smashed in this debate. Gobekli Tepe may be just the hammer for which we have been waiting.
John at 10:38:00 AM
Share
‹
›
Home
View web version