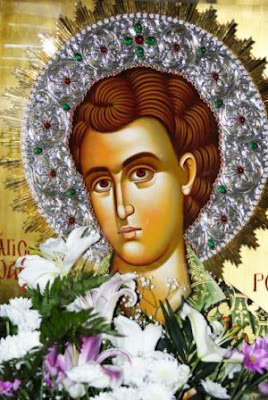 1. "The Saint Was Helping Me To Pray"

The first time I came here with my friends, I barely knew who St. John was, nor did I know what to expect, as I had never seen incorrupt relics before. At first I was shocked - the saint's body was certainly there, as it should not have been if it had been subject to the normal processes of nature, but his skin looked dark and a little withered, and I was fearful of coming any closer to the glass coffin. I finally gathered my courage and went up to look. His face was covered with a gold cloth, out of reverence, but I could clearly see his hands and wrists. I knelt down beside the coffin to pray, feeling that even if it seemed strange to me, I should still try to be respectful. I asked the saint to help me understand what I was seeing, and to know him. When I finished praying, I went to sit in a chair off to the side while I waited for my friends. I thought that I should pray some more, but I didn't know any prayers to St. John so I took out my Akathist Hymn to the Panagia, which I always carry with me, and told St. John that it was for him also. I begged him to forgive me for not having a special prayer for him alone.

Probably like most people, I often don't pray very deeply unless someone I love is ill or in danger, and this time I began read the Akathist to the Panagia in my usual way, although I tried hard to concentrate on the words. Suddenly, I felt that someone had come up and was standing next to me. I looked around quickly, but the nearest person was kneeling at the relics with his back to me, about a dozen meters away. I went back to my prayers, and although I didn't actually hear anything spoken aloud, I had the distinct impression that someone was praying to the Panagia with me, with great strength and love. I suddenly found myself praying with a depth I have never felt before or since - as if I was somehow in the middle of the prayer, and it was alive. I could feel the prayer moving up to heaven, and I knew in my soul that it was St. John himself, praying with me.

I was filled with such awe and joy at the nearness of the saint who was helping me to pray even though I had been afraid of him. It felt like Pascha, and as if I had just received the Holy Mysteries. I come to him now as often as I can. 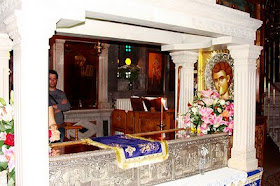 For many years, pilgrims to the shrine of St. John the Russian saw a simple cane standing before the glass-enclosed sepulchre. It belonged to an old woman, Maria Spaik, who was bent over from osteoporosis and had been unable to stand upright for eighteen years. In August 1978, he relatives brought her to the Church of St. John and lifted her in their arms so that she could venerate the relics. When Maria saw the incorrupt body of the Saint, she began to cry, asking St. John to help her. As she prayed over the relics, she felt an invisible hand touch her back. The old woman drew herself up erect. Tears appeared in the eyes of all the onlookers. The bells were rung, and a Supplication Service was sung in thanksgiving. The cane was left at the shrine as a memorial of the miracle.

3. An Escape From Bandits

In 1878, Fr. Andrew, a monk from the Russian Monastery of St. Panteleimon on Mount Athos, made a pilgrimage to Prokopion to pray before the relics of St. John. When he arrived he venerated the Saint with great joy, and remained in the village for some time. On his way to Constantinople he travelled with six coaches of Turkish merchants from Anatolia, also on their way to the capital. As they reached a rutted and desolate part of the road, the monk's coach and one other slowed down to avoid mishap, while the rest went on ahead. Suddenly, a young man on a red horse appeared on a low hill near Fr. Andrew's coach, waving his hand and shouting, "Turn back! Robbers have captured your companions!" As soon as he sounded the warning, he vanished from in front of their eyes.

The two coaches immediately turned back, and although pursued by the robbers, they escaped unharmed. Fr. Andrew hastened to the nearest village, where he continued his journey in the company of Turkish soldiers. At a country inn where they spent the night, he met his former merchant-companions, who told him that the thieves had not only taken their money, but even their clothes, and they were amazed that the last two coaches had escaped unharmed. Fr. Andrew related the appearance of the youth, and they all glorified God, understanding that it was the Saint himself who had saved the monk after his pilgrimage to Prokopion.
John at 11:25:00 AM
Share
‹
›
Home
View web version