Synaxarion for the First Saturday of Great Lent 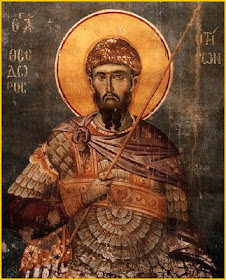 On this day, the Saturday of the First Week of the Fast, we celebrate the wondrous miracle wrought through Kollyva by the holy and glorious Great Martyr Theodore the Recruit.

The Recruit entertaineth the city with the nourishment of Kollyva,
Thereby rendering the polluted delicacies ineffective. 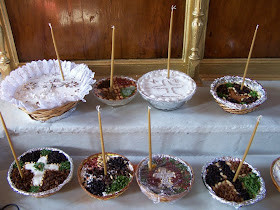 
When Julian the Apostate, who ruled over the Empire after Constantios, the son of Constantine the Great, had departed from Christ to idolatry, a mighty persecution was stirred up against Christians, both openly and secretly. Refraining from inflicting savage or inhuman punishments on them, the ungodly Emperor tempted the Christians in the following way: feeling shame, and at the same time suspecting that more might be added to their numbers if he persecuted them openly, the crafty and impious man plotted somehow to pollute them secretly.

Observing that our Christian race purifies itself and devotes itself to God more during the First Week of the Fast, he summoned the Eparch of the city and ordered him to remove the food that was usually for sale and to set out other comestibles in the marketplace, namely bread and beverages, having first mixed these with the blood from his sacrificial offerings, polluting them in the process, so that, when the Christians purchased them during the Fast, they might be defiled rather than cleansed. The Eparch carried out his order immediately and set out all over the marketplace the food and drink that had been polluted with blood from the sacrifices.

But the all-seeing eye of God, Who catches the wise of this world in their cleverness and ever provides for us, His servants, destroyed the loathsome devices directed against us by the Apostate. He dispatched His Great Trophy-bearer, Theodore the Recruit, to Evdoxios, the Archbishop of the city, who had obtained this office improperly.

Standing before Evdoxios, not in a dream, but while he was awake, St. Theodore spoke words such as these: “Arise with all speed and gather together the flock of Christ, and order them under no circumstances to buy any of the items set out in the marketplace; for they have been polluted by the most impious Emperor with blood from his sacrificial offerings.” Puzzled by this, the Archbishop asked: “And how can those who do not have abundant provisions in their homes easily avoid buying food from the marketplace?” “Provide them with Kollyva,” the Saint replied, “to relieve them in their time of need.” Puzzled again, and not knowing what Kollyva was, Evdoxios asked the Saint for an explanation. The great Theodore replied: “It is boiled wheat; for this is what we are accustomed to calling it in Euchaïta.” When the Archbishop inquired who precisely this provider for the Christian people might be, the Saint answered: “I am Theodore, the Martyr of Christ, Who has just now sent me to aid you.”

The Archbishop arose at once and announced what he had seen to the multitude. By acting thus, he preserved Christ’s flock unharmed by the machination of their enemy, the Apostate. When Julian saw that his trickery had been exposed, that he had accomplished nothing, and that he had been sufficiently put to shame, he ordered the usual comestibles to be put back in the marketplace.

At the end of the week, the Christian people gave thanks to their benefactor, the Martyr, and joyously celebrated his memorial on this Saturday with Kollyva. Ever since then, and up until now, we faithful revive this miracle, lest the Martyr’s great deed become forgotten with the passage of time, and celebrate the memory of the Great Theodore with Kollyva.

By his intercessions, O God, have mercy on us and save us. Amen. 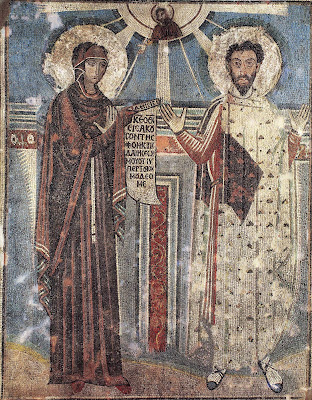 Friday and Saturday of the First Week
By Sergei Bulgakov
Friday Evening of the First Week
Friday begins the commemoration of St. Theodore the Recruit. At the Presanctified Liturgy, after the Prayer before the Ambo, the Molieben with the Canon to St. Theodore is sung before the "offered Koliva" and the Koliva is blessed. The Order of the Blessing of the Koliva is in the Typicon (Ustav), in the order for Friday of the First Week. The prayer for the blessing of the Koliva is found in the Priest's Service Book (Sluzhebnik), in the order of blessing of the Koliva on feasts. Concerning food on this day the Typicon (Ustav) reads: "Entering the refectory; we partake of wine and oil for the holy saint. For this is done in the Laura of our Father among the Saints Sabbas and in the Coenobium of the Ven. Euthymius the Great. But we do not do this now in honor of the day, and moreover we eat plum preserves without oil and food." They also voluntarily eat xerophagy as on Wednesday.
Saturday of the First Week
On this day the Holy Church commemorates St. Theodore the Recruit, "great among martyrs, spiritual athlete, illustrious and renowned, glorified for his miracles, from one end of the earth to the other". By this commemoration the Holy Church inspires the faithful that lent is pleasing to God and that fasting is under the special protection of God.
On all Saturdays of Lent, except for Passion Saturday, there is a liturgy of St. John Chrysostom. On Sundays, except for Palm Sunday, the liturgy is that of St. Basil the Great.
In the refectory on Saturday of the First Week "we eat scalded beans, with white and black olives and preserves with oil. We drink a cup of wine in honor of the Saint. This practice agrees with that of the Laura of Our Venerable Father Sabbas and with our God-bearing Father Euthymius".
Source 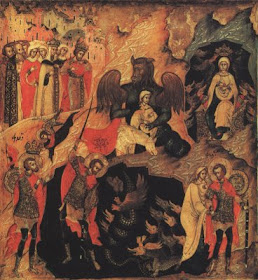 Apolytikion in the Second Tone
Great are the achievements of faith! In the fountain of flame, as by the water of rest, the holy Martyr Theodore rejoiced; for having been made a whole-burnt offering in the fire, he was offered as sweet bread unto the Trinity. By his prayers, O Christ God, save our souls.
Kontakion in the Plagal of the Fourth Tone
Having received the Faith of Christ in thy heart as a breastplate, thou didst trample upon the enemy hosts, O much-suffering champion; and thou hast been crowned eternally with a heavenly crown, since thou art invincible.
John at 8:16:00 AM
Share
‹
›
Home
View web version