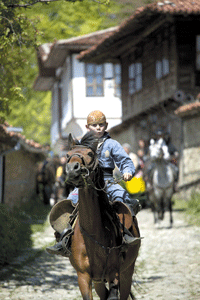 March brings a host of traditional celebrations, which make life in Bulgaria both culturally rich and tremendous fun. Todorov Den is celebrated during the first week of the Orthodox Church's Long Lent and is often known as ‘Horse Easter.'

Theodore the Tiro was known as a martyr from Amassea in Asia Minor. He lived during the time of the emperor Maximian and was born into the Christian faith. As a Roman legionary, his troop was stationed at Euchaita. The legion's commander instructed his men to make a sacrifice to some of the pagan gods. This being against Theodore's religious beliefs he spoke out and said, ‘I adore only Christ. It is only to him that I'm willing to offer a sacrifice.' His love of Christ was so strong that he burnt a pagan temple to the ground one night and was caught by other soldiers who took him to the governor Publius. After questioning he was put into jail on the governors orders. He was not treated badly at first, he was offered bread and water to eat, but he refused it. Publius even offered him the post of high priest, but Theodore said that his love of Christ was such that he would withstand any torture given to him rather than betray God. Publius feared that other Christians may follow Theodore's example so he sentenced him to die at the stake.

In 361, fifty years after Theodore's death, Emperor Julian the Apostate a confirmed pagan was attempting to stamp out Christianity. He ordered that during the Christian Lenten 40-day fast all food sold in Constantinople should be sprinkled with the blood of those people sacrificed to the pagan gods, his reasoning was that this would mean that everyone in the city was actually participating in the worship of the pagan gods. The Church holds that at this time, God sent Theodore to see Eudoxius, Patriarch of Constantinople to urge him to tell all of the Christians not to buy any of this food, but to make their own kolyva, which was made from grain. The Orthodox Church has celebrated this event on the first Saturday of Lent ever since. Reverend Vassil Kotsev says, "The story of the holy Martyr Theodore of Tyrone is indeed amazing. A professional warrior, otherwise a staunch Christian, Theodore stood up against the inhuman attitude to the Christian faith in his time. Professing fearlessly his faith, Theodore was subjected to inhuman tortures and met with death at the stake. Ever since, he's been one of the holy martyrs of Christianity."

Todorov Den is celebrated in many different ways across Bulgaria, but first and foremost anyone with a name deriving from Todor celebrates this as their name day. Traditional kolyva is taken to church and blessed by at a special service to honour the saint. Horses play a leading role because they are still a central part of working village life. Many towns and villages hold horse races and tests of the horse's strength in the main streets. These races are not dogged by issues of health and safety; riders often ride bare back without the need for helmets. The tests of strength require the horses to pull a felled tree and the distance is measured, this is the type of work that these horses do on a daily basis in parts of Bulgaria. The famous 19th century Bulgarian historian Dimitar Marinov once noted, "The fastest horse, all decked in wreathes, paced ahead, amidst drums and whistles. Everyone would gather at the hub of the village where lasses and lads start a grandiose horo dance encircling the horses and the riders. The horse-race winner would then reach his home and, there, a maid or his young bride would welcome him with a white pot of water or wine." Even today in towns like Chepelare in the Rhodope Mountains , the tradition has not changed.

In Western Bulgaria, newlywed winter brides rise early and bake kolyva, which they take straight to the church. All of the bread is arranged in a pattern and a special ceremony takes place; the girls wear long white scarves around their heads, they must bow three times in front of their mother-in-law. This act ends the traditional period of silence observed by new brides as a mark of respect to their in-laws. The group of brides and mothers then join hands and dance. In the eastern part of the country, young girls go out into the fields to invite the spring to come by singing and dancing. They do this over three days, one of which coincides with Todorv Den. In kindergartens small children learn the songs and dances relevant to the celebration and often put on a performance with wooden horses.
John at 8:11:00 AM
Share
‹
›
Home
View web version