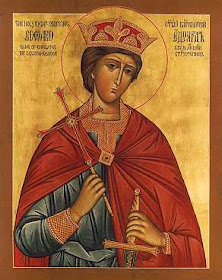 
"Men murdered him but God has magnified him."
(The Anglo Saxon Chronicle)
St Edward was the son of Edgar, by his first wife Ethelfleda (died c. 963/4). King Edgar (c. 944-975) reigned from 959 to 975 and on his death Edward became king. Edward was supported by the Archbishop of Canterbury, St Dunstan, as he was only in his mid-teens. The succession was disputed because King Edgar's second wife, Aelfthryth (c. 945-1000), wished her son Ethelred to be king. (Ethelred is known to history as Ethelred the Unready or "the Redeless".) Two or three years later, on 18 March 978 or 979, Edward was murdered near the site of Corfe Castle, Dorset, almost certainly the victim of his stepmother's intrigues.

Edward's initial burial was hurried. Soon miraculous cures were attributed to Edward by visitors to the site of his grave. In 980 his body was moved to Shaftesbury Abbey, the relics were enshrined in 1001, and he was officially canonized in 1008. St Edward's shrine survived until the Dissolution of the Monasteries, when it was stripped of its wealth. However, St Edward's remains had previously been removed and hidden in the church.

In 1931 a crude casket was unearthed during an archaeological investigation of the site. The remains were studied and pronounced consistent with the injuries received by St Edward. The Director of the Excavations, John Wilson-Claridge (1905-1993), whose family then owned the site, began years of painstaking negotiations with all the major churches in order to find a suitable resting place for the relics. He imposed three conditions: (1) that they were recognised as the relics of a saint, (2) that a shrine would be established for their reception, and (3) that his feast days would be observed. These conditions were met only by the Russian Orthodox Church in Exile, which entered into detailed negotiations with Mr Wilson-Claridge in the late 1970s.

At about the same time the Orthodox Church purchased the site now owned by the St Edward Brotherhood, with the intention of using the larger of the two mortuary chapels for the reception of St Edward's bones. The formal ceremony of enshrinement took place on 15/16 September 1984. Thus for the first time in nearly 450 years the remains of St Edward (arguably England's least important king) have a fitting resting place within a Church whose doctrine is closest to that which he knew in his lifetime. 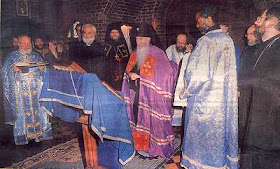 2001 marked the one thousandth anniversary of the glorification of St Edward. In 1001, it was decided to enshrine his relics at Shaftesbury Abbey in a costly and elaborate shrine. This decision was based on the continued slight levitation of the cover of his grave in the Abbey, and from the dreams of a devout man to whom St Edward is said to have appeared and indicated that he no longer wished to lie in this grave. The man told the Abbess of his dreams, she referred the matter to King Ethelred (St Edward's step-brother), and the King ordered the relics to be enshrined in a suitable place in the Abbey Church. A Royal Charter dated 1001 states that "I, King Ethelred, King of the English, with humble prayer, offer the monastery ... my brother Edward, whom the Lord himself deigns to exalt in our days by many signs of virtue, after his blood was shed."

A special service was held in the St Edward the Martyr Church on 31 March 2001 to celebrate this event. The Hierarchical Liturgy was led by Archbishop Mark (photo above) who has pastoral oversight of the parishes of the Russian Orthodox Church Abroad in the British Isles.

The Life Of Among The Saints Edward The Martyr, King Of England 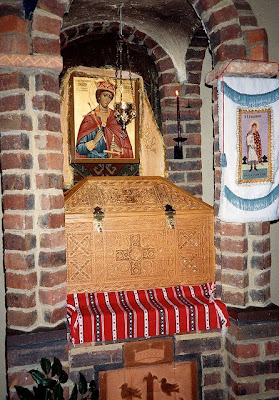 Excerpt from The Anglo Saxon Chronicle:

978 - This year all the oldest counsellors of England fell at Calne from an upper floor; but the holy Archbishop Dunstan stood alone upon a beam. Some were dreadfully bruised: and some did not escape with life. This year was King Edward slain, at eventide, at Corfe-gate, on the fifteenth day before the calends of April. And he was buried at Wareham without any royal honour. No worse deed than this was ever done by the English nation since they first sought the land of Britain. Men murdered him but God has magnified him. He was in life an earthly king -- he is now after death a heavenly saint. Him would not his earthly relatives avenge -- but his heavenly father has avenged him amply. The earthly homicides would wipe out his memory from the earth -- but the avenger above has spread his memory abroad in heaven and in earth. Those, Who would not before bow to his living body, now bow on their knees to His dead bones. Now we may conclude, that the wisdom of men, and their meditations, and their counsels, are as nought against the appointment of God. 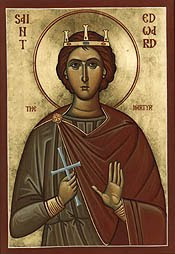 Apolytikion in the Fourth Tone
Celebrating the newly manifest commemoration of the holy King Edward, who shone forth of old in the virtues and suffered undeservedly we all bow down before the Icon of his honoured countenance and in gladness cry out: Truly Thou art wonderful in Thy Saints, O God.
John at 11:38:00 AM
Share
‹
›
Home
View web version