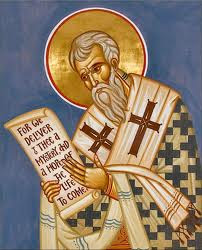 With the guarantee of religious tolerance, granted in 313 by Constantine with the Edict of Milan, a new chapter opened in the history of the Church. Along the smoother path more people were attracted to the doors of the Church, spurring its growth and bringing new challenges. Unlike the early Christians, who fully expected their faith to be tried by fire or the sword, these newcomers were not always inspired by burning convictions: a pagan husband might approach the font at the urging of his believing wife, a servant-to curry favor with his believing master; as the practice of infant baptism grew, so did the ranks of younger generations who had not themselves made a conscious profession of faith. To properly initiate these candidates into the mysteries of the Faith was no small task. The difficulty was compounded by troubles brewing within the Church itself. Attacks from without had not yet subsided when, in 318, the Arian heresy erupted. Although it was condemned in 325 by the First Ecumenical Council, it was only towards the end of the century that its proponents were finally forced to cease their divisive maneuverings. It was essential, therefore, that recruits be adequately equipped with sound doctrine and other spiritual armor before they could be expected to conduct themselves as true soldiers of Christ. Among those who shouldered this responsibility, one of the most gifted was St. Cyril of Jerusalem. To this day, his Catechetical Lectures provide a concise course par excellence in the fundamentals of Orthodox doctrine.

For a renowned Church Father, St. Cyril's Life is constructed on surprisingly meager details. According to the Greek Menaion, Cyril was "born of pious parents, professing the Orthodox Faith, and to have been bred up in the same, in the reign of Constantine." The year of his birth is generally given as 315 and the location in or around Jerusalem, for it was customary to choose a bishop from among the local clergy, a man already known and respected by the people over whom he would assume spiritual authority. His youth coincided with the height of Arian domination and the rediscovery of the Holy Sepulchre in 326, when Jerusalem, a relatively poor community, began moving into prominence. In 335 Constantine's magnificent Church of the Resurrection was dedicated and Cyril, a new deacon, undoubtedly took part in the ceremonies. The principal celebrants were Arians, who had just deposed their vigorous opponent, St. Athanasius, in a council at Tyre. The Church at Jerusalem, however, never embraced Arianism. Bishop Macarius, and his successor Maximus who ordained Cyril to the priesthood in 345, were both staunchly Nicaean. And when, on Maximus' death in 350, Cyril succeeded him as bishop, he continued to guide the Church at Jerusalem from this position.

Meanwhile, Bishop Acacius of neighboring Caesarea had been drawn into the Arian camp. This conflict between the two hierarchs was sharpened by the resentment Acacius felt when Cyril disputed Caesarea's jurisdiction over Jerusalem, now an established center of pilgrimage and sprouting monastic communities. In 357 Acacius successfully maneuvered to have Cyril deposed. Banished for two years, Cyril went to Tarsus, where he associated with Basil of Ancyra, a champion of Nicaea. There, too, he won the hearts of the people with his preaching. Cyril was banished a second time in 360, returning after the accession of Julian in 361, when all exiled bishops were recalled. Nothing is known of his third period of banishment, from 367 to 378, under the Arian Emperor Valens. In 381 Cyril went to Constantinople as one of 150 Church Fathers who took part in the Second Ecumenical Council. He died peacefully on March 18, 386, remembered by the Church as a great ascetic and uncompromising champion of the true Faith. St. Cyril's principle claim to fame, however, rests on his catechetical lectures. These form a systematic course of instruction which he developed as a priest assigned to prepare candidates for baptism. Essentially practical, highly biblical, direct and noble in tone, they reflect St. Cyril's sincere pastoral concern. Their primary purpose is not to discuss or examine, nor to defend, but to impart knowledge of the Faith. Very striking here is the thoroughness of this preparation and the seriousness with which entry into the Church was regarded. Even before being made catechumens, candidates were strictly examined as to their character, belief and sincerity of purpose. The probationary period varied, lasting about two years.

At the heart of these lectures is a perfectly balanced emphasis on God's transcendence and the ineffable wonder and dignity of the heavenly citizenship conferred through Baptism on the one hand, and man's essential responsibility for genuine repentance and good works on the other. St. Cyril skillfully prepares his listeners in his Introductory Lecture, by turns sobering and exalting, which emphasizes at the outset the need for a sustained purpose. Taken from this lecture, the following passages are characteristic of the Saint's teaching.

§ He lieth not who said, that to them that love God all things work together for good. God is lavish in beneficence, yet He waits for each man's genuine will: therefore the Apostle added and said, to them that are called according to a purpose (Rom. 8:28). The honesty of purpose makes thee called: for if thy body be here but not thy mind, it profiteth thee nothing..

§ Let none of you be found tempting His grace.

§ ...beware lest thou have the title of "faithful" but the will of the faithless. Thou hast entered into a contest, toil on through the race: another such opportunity thou canst not have.

§ Attend closely to the catechisings, and though we should prolong our discourse, let not thy mind be wearied out. For thou art receiving armor against the adverse power, armor against heresies... Thou hast many enemies; take to thee many darts, for thou hast many to hurl them at... And the armor is ready, and most ready the sword of the Spirit; but thou also must stretch forth thy right hand with good resolution, that thou mayest war the Lord's warfare.

§ Great is the Baptism that lies before you: a ransom to captives; a remission of offences; a death of sin; a new-birth of the soul; a garment of light; a holy indissoluble seal; a chariot to heaven; the delight of Paradise; a welcome into the kingdom; the gift of adoption! But there is a serpent by the wayside watching those who pass by: beware lest he bite thee with unbelief...

§ We for our part as men charge and teach you thus: but make not yet our building hay and stubble and chaff, lest we suffer loss, from our work being burnt up: but make ye our work gold and silver, and precious stones! For it lies in me to speak, but in thee to set thy mind upon it, and in God to make perfect. 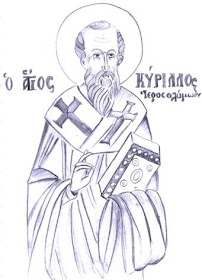 The first two lectures stress the need for thorough repentance and hope in the remission of sins: "Cleanse thy vessel that thou mayest receive grace more abundantly ...thorny ground also, if cultivated well, is turned fruitful." In the third lecture, "On Baptism", St. Cyril impresses on his audience that "this is no light matter, no ordinary and indiscriminate union according to the flesh, but the All-searching Spirit's election according to faith...Each one of you is about to be presented to God before tens of thousands of the Angelic Hosts: the Holy Spirit is about to seal your souls: ye are to be enrolled in the army of the Great King. Therefore make you ready...that thou mayest become an heir of God, and joint-heir with Christ."

The next lecture provides "a short summary of necessary doctrines," carrying brief statements concerning the Oneness of God, Christ as the Only-begotten Son, His Birth of the Virgin, the Cross, His Burial, Resurrection and Ascension, the Judgment to Come, the Soul ("the noblest work of God"), the Body, Fasting, Baptism, the Scriptures. Following another general lecture, "On Faith," St. Cyril launches into a series of thirteen lectures explaining in greater detail the successive articles of the Jerusalem Creed, which the candidates were required to recite by memory at the time of their baptism.

A second series of five lectures was delivered on Bright Monday to the newly-baptized. Here the Saint initiates them, as it were, into the knowledge of those rites which they have experienced for themselves for the first time, having been strictly required as catechumens to leave the church after the reading of the Gospel and the exclamation, "Catechumens, depart!" The Saint explains to his "true-born" listeners the actual rites of baptism and chrismation, the Eucharist and the Liturgy of the Faithful, with particular attention to the Lord's Prayer. His joy at thus welcoming the new Christians is unmistakable. These five lectures are particularly valuable to us today in documenting the liturgical practices of the early Church, providing stunning evidence of Orthodoxy's ancient liturgical roots. Indeed, it is thrilling to read a fourth-century text that so closely accords with our experience today.

The lectures give one to understand that the course was not limited to candidates for baptism. Those already baptized also came to be edified. Even today, these lectures should be required study for potential converts, while those of us who are already baptized would likewise do well to avail ourselves of these clear streams of living water, to strengthen our faith with knowledge and refresh our sense of awe at the great mystery of our salvation. We owe a great debt to St. Cyril who, through laboring on these lectures, found lasting favor with God and man.