Why Did Rachel Weep For the Holy Children of Bethlehem? 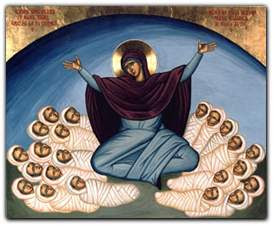 When the Holy Infants were killed under King Herod, we read in Sacred Scripture:

"Then was fulfilled that which was spoken by Jeremiah the Prophet, saying: In Rama was there a voice heard, weeping and great mourning; Rachel weeping for her children."

A difficulty with this passage lies with the fact that the tribe of Benjamin (that of Rachel) did not include Bethlehem. Why then did she cry for them if children of Bethlehem seem not to be her biological children?

"The child of Rachel was Benjamin, and Bethlehem is not a town belonging to his tribe. We must therefore seek another reason why Rachel should weep for the children of Judah, to whom Bethlehem belonged, as for her own. The plain answer is that she is buried at Ephratha close to Bethlehem, and she is called Mother on account of the resting-place of her earthly tabernacle being there. It is possible also that she is called Mother because the tribes of Judah and Benjamin were joined together, and Herod slew not only all the children that were in Bethlehem, but also in all the coasts thereof." 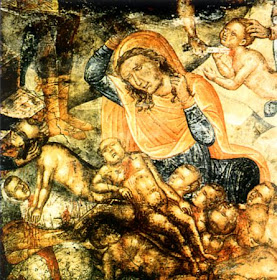 "But what, it may be said, has Rachel to do with Bethlehem? For it says, 'Rachel weeping for her children.' And what has Rama to do with Rachel? Rachel was the mother of Benjamin, and on her death, they buried her near this place. The tomb then being near, and the portion pertaining unto Benjamin her infant (for Rama was of the tribe of Benjamin), from the head of the tribe first, and next from the place of her sepulchre, he naturally denominates her young children who were massacred. Then to show that the wound that befell her was incurable and cruel, he says, 'she would not be comforted because they are not.'"

Hence, because Rachel's tomb was on the road towards Bethlehem, and because the slaughter took place in that area, Rachel wept. 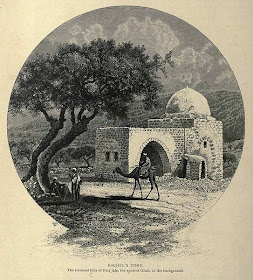