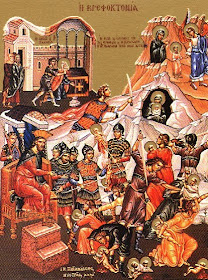 When the Magi from the east did not return to Jerusalem from Bethlehem to inform Herod about the newborn King but rather, at the angel's command, returned to their homeland another way, Herod became as enraged as a wild beast and ordered all the children two years old and under in Bethlehem and its surroundings to be killed.

This frightening command of the king was carried out to the letter. His soldiers beheaded some of the children with swords, smashed others against stones, trampled others underfoot, and strangled others with their hands. And the cries and wails of the mothers rose to heaven, lamentation, and bitter weeping; "Rachel weeping for her children" (Jeremiah 31:15, Matthew 2:18), as had been prophesied.

This crime against the multitude of innocent children was carried out a year after the birth of Christ, at the time when Herod was seeking to find the Divine Child. He asked Zacharias about his son John, so that he might kill him, since he naturally thought that John was the new king. As Zacharias did not turn John over, he was slain in the Temple by order of Herod. St. Symeon the God-Receiver would also have been murdered soon after the Presentation in the Temple, had he not already reposed in God.

After murdering the children of Bethlehem, Herod turned against the Jewish elders who had revealed to him where the Messiah would be born. He then killed Hyrcanes, the high priest, and the seventy elders of the Sanhedrin. Thus, they who had agreed with Herod that the new Child-king must be killed came to an evil end. After that, Herod murdered his brother, sister, wife and three sons.

Finally, God's punishment came to him: he began to tremble, his legs became swollen, the lower part of his body became putrid, and worms came out of the sores; his nose became blocked and an unbearable stench emanated from him. Before his last breath, he remembered that there were many captive Jews in prison, and he ordered that they all be killed so that they would not rejoice in his death. Thus, this terrible ruler gave up his inhuman soul and handed it over to the devil for eternal possession. 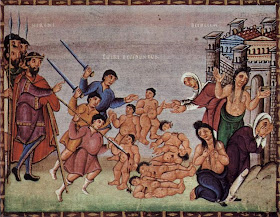 HYMN OF PRAISE:
The Fourteen Thousand Holy Children of Bethlehem

A voice in Rama was heard, and much weeping,
And sorrowful mothers crying out to God.
In blood lay the slaughtered children,
And, over them, sorrowful mothers lamented.
The city of David, with all the surrounding region, moans;
Heaven was horrified at the misdeed of men;
Heaven and earth were horrified and quaked,
When the screams of the innocent pierced the air.
The blow intended for the Son of God
Fell with its weight on the innocent children,
Upon young and helpless ones of the same age as Christ.
The servants of the wicked king attacked
Where the angels of God sang
And where Christ's shepherds humbly knelt.
There a torrent of blood flowed.
Why? In order that Herod would always be first!
As soon as the Eternal Physician appeared on earth,
The earth revealed its wounds and sins,
Showing how much mankind is infected,
And how necessary healing from heaven is.
Upon the young forerunners of His suffering,
Christ bestowed the eternal joy of Paradise. 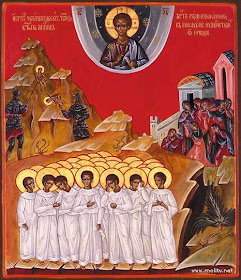 Apolytikion in the First Tone
Be entreated, O Lord, by the sufferings endured for You by the Saints, and we pray You, heal all our pain.

Apolytikion in the First Tone
As acceptable victims and freshly plucked flowers, as divine first-fruits and newborn lambs, you were offered to Christ who was born as a child, Holy Innocents. You mocked Herod's wickedness; now we beseech you: "Unceasingly pray for our souls."

Kontakion in the Plagal of the Second Tone
When the King was born in Bethlehem, the Magi arrived from the East with gifts guided by a Star on high, but Herod was troubled and mowed down the children like wheat; for he lamented that his power would soon be destroyed.

Vesper Hymn in the Fourth Tone
When the Virgin had brought Thee forth, O eternal and changeless Lord, when in Thy great goodness Thou hadst become a babe, to Thee was offered up a choir of holy babes in martyric blood, having pure and stainless souls and made shining in righteousness; whom Thou tookest up to abide in Thine ever-living mansions, where they scorn the malice of ruthless Herod's insanity.
John at 10:39:00 AM
Share
‹
›
Home
View web version