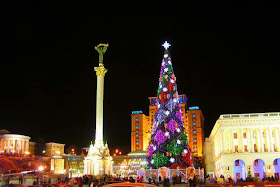 Ukraine celebrates Christmas on January 7. A Christmas tree on Independence Square in Kiev doubles as a New Year's tree. While celebrating Christmas was not accepted during much of the 20th century, an increasing number of families celebrate Christmas in Ukraine.

The season of Christmas begins with advent (Pylypivka) - four weeks of fasting and preparing one's self for the birth of Christ. In preparation for Christmas, the house is cleaned from top to bottom and the outside of the house is whitewashed. A sheaf of wheat (didukh) is saved from the harvest. The didukh represents the family: the living, the dead and those unborn. Before Christmas Eve (Sviata Techera), the sheaf is decorated with ribbons, flowers and a small wreath of basil. It is put under an icon in a corner of the room on Christmas Eve. Those who are familiar with Ukrainian culture will understand the importance of grain to Ukraine – even the Ukrainian flag, with its blue and yellow colors, represents golden grain under a blue sky.

Ukraine's Santa Claus is called Did Moroz (Father Frost) or Svyatyy Mykolay (St. Nicholas). Ukraine has a special connection with St. Nicholas, and the figure of St. Nicholas and Did Moroz are closely associated. St. Nicholas Day on December 19th, not Christmas, is the usual gift-giving day in Ukraine, though today it is altered to Christmas day. On this day people invite guests in and sleighs would be ridden around the village to see if the snow was slippery [icy]. This is the holiday for young children, for they would receive gifts from St. Nicholas, the patron saint of children. "St. Nicholas" was often accompanied by "angels" and might have quizzed the children on their catechism. Father Frost rides a sleigh, which is carried by reindeers. Snowflake Girl, who dons a silver blue costume that is trimmed with white fur and a crown of snow, assists Father Frost in his journey.

Sviaty Vechir, or Holy Evening, is the Ukrainian Christmas Eve. Families celebrate with special food. Hay may be brought into the house to remind those gathered of the manger in which Christ was born. Families wait until the first star appears in the sky before beginning to eat and may attend church services late that night.

On the Christmas Eve, church services begin before midnight and continue till the next morning. The traditional Christmas greeting 'Khristos rodyvsya!' or 'Khristos razhdayetsya' (meaning "Christ is born!"), is recited by the head of the family. The other members of the family answer him by saying 'Slavite Yoho!' ("Let Us Glorify Him!"). The entire family sings Ukrainian Christmas carols or Kolyadky after supper. In some Ukrainian communities, the ancient tradition of caroling is still continued. Youngsters or members of church go from door to door and collect donations from celebrators. 'Boh predvichny' is the most popular Ukrainian carol. Ancient pagan songs converted into Christian carols are also sung.

The traditional Christmas customs in Ukraine used to be colorful and full of conviviality. However, the contemporary celebrations are more focused on the ‘Holy Supper’ and the religious services of the church.

The tradition of spider webs on the tree, which is a symbol of good luck, is based upon the following legend:

There once was a widow, who lived in a small hut. One day a pinecone dropped on the floor and it took root. Her children were excited that they would have a tree for Christmas. All summer long they made plans on how they would decorate the tree. They were very poor, so poor that they did not have anything to decorate the tree with. The widow went to bed on Christmas Eve knowing that the tree would not be decorated. Early on Christmas morning, the woman was awakened by her children. "Mother, mother wake up and see the tree it is beautiful!" The mother arose and saw that during the night a spider had spun a web around the tree. The youngest child opened the window to the first light of Christmas Day. As the shafts of the sun crept along the floor, it touched one of the threads of the spider web and instantly the web was changed into gold and silver. And from that day forward the widow never wanted for anything.