Synaxis of the Holy Family of Saint Gregory Palamas 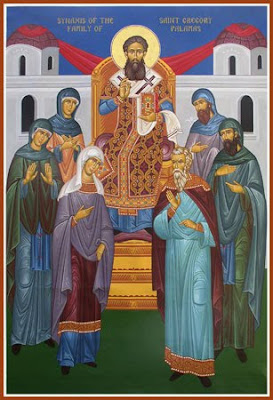 In 2009, at the recommendation of the Metropolis of Berea, Naousa and Kampania, the Ecumenical Patriarchate established a feast day in honor of the family of St. Gregory Palamas. His father's name was Constantine, his mother Kalloni, his brothers were Makarios and Theodosios, and his sisters were Theodote and Epicharis. The day chosen for the feast is December 18th or the Sunday after November 14th.

St. Philotheos Kokkinos, a disciple of St. Gregory and his biographer, writes the following of his father:

"Gregory was the offspring of noble and pious parents. So virtuous was his father that the emperor Adronikos II Palaiologos, made him one of his counselors. And not only the earthly king, but also God the Heavenly King, honored and glorified him even while he was still alive with miracles. Foreknowing his death, Constantine – that was his name – took the Angelic Habit, that is, he became a monk, and was named Constantios."

Concerning the rest of his family, St. Philotheos writes of them:

"At the age of 20, after turning down all the honors and promises of the emperor he [Gregory] decided to flee the City and go to Mount Athos. Having convinced all the members of his family to follow in his example, he came to the Lavra of Vatopaidi – one of the biggest monasteries even today – and gave himself up to the venerable elder Nikodemos. He received the Angelic Schema from this elder and in a very short time – under the guidance of his elder – he climbed the ladder of practice [praxis] and reached the great heights of vision [theoria]."

While speaking of St. Gregory's time at his monastery in Berea, St. Philotheos writes concerning his mother and sisters:

"During that period his mother died, and having received a letter from his sisters pleading to see him – they were in need of consolation and spiritual direction – he decided to visit them. Thus he came to Constantinople. Followed by his sisters he returned to Thessalonika, were he placed them in a convent, while he moved back to his cell in Boerea."
Thus the parents, brothers and sisters of St. Gregory followed his example and lived as monastics till the end of their lives. 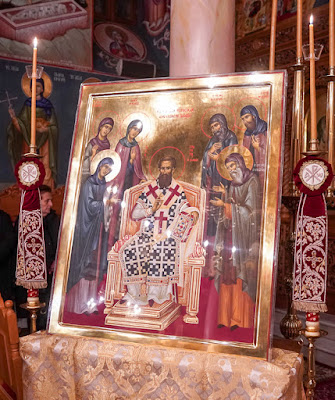 Apolytikion in Plagal of the First Tone
Kalloni who was blessed with fair children and right-minded Constantine, the great athlete and visionary, O Hierarch, and Epicharis the bride of Christ, Venerable Theodote the wise, with the sacred Theodosios and Makarios, we sing of their contests. Glory to Him Who crowned them, glory to Him Who made them luminous, with His uncreated and everlasting light of theosis.
Kontakion in Plagal of the Fourth Tone
As you once longed for the heavenly, you gave your nous wings to fly impassible heights, being found worthy of divine vision through purification, illumination and theosis, seven in number Palamas family, wherefore we cry out to you: Illumined by God, rejoice household of grace.
Oikos
May the Lord of lords, bless the seven in number household, parents and children, of venerable ascetics in the bright, queen city to be ever with Him, having managed well His ordinances, and to them we cry:
Rejoice, household of hesychasm;
Rejoice, wine of chastity;
Rejoice, family of theoria and praxis;
Rejoice, the seven secret ascent;
Rejoice, for you uprooted the soul-wounding passions;
Rejoice, for you received once again the beneficial;
Rejoice, for you denied the love of the world;
Rejoice, for you renounced the love of life;
Rejoice, faithful suppliant to the Lord;
Rejoice, the shield of the nous within;
Rejoice, seven-colored luminous rainbow;
Rejoice, chorus of the founder of nepsis;
Rejoice, household of grace.
See also the documentary below (in Greek with English subtitles) on the family of St. Gregory Palamas: