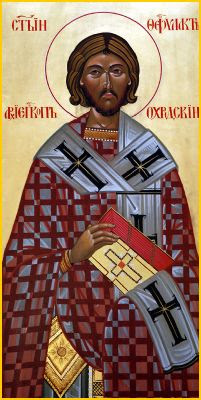 
Blessed Theophylact (θεοφύλακτος, meaning "Guarded by God") was a true son of the Byzantine (Eastern Roman) Empire. He was a product of the highly developed cultural and religious civilization emanating from the “queen of cities,” Constantinople. Born on the Greek island of Euboia some time between 1050 and 1060, Theophylact went to Constantinople to study under the finest teachers of literature and rhetoric of his time. After his ordination, he served as deacon, assisting the Patriarch at Hagia Sophia, and soon gained renown as a preacher of the Gospel and master of rhetoric. The Emperor Alexios I Comnenos made him the tutor of his future son-in-law, the heir presumptive.

About the year 1090 Theophylact was sent to the Macedonian city of Ochrid to be enthroned as Archbishop of the Bulgarian Church. Ochrid was the capital city of the Bulgarian kingdom that had been conquered by the Byzantine Emperor Basil II in 1018. In this demanding position in a conquered territory on the outskirts of the Empire, Blessed Theophylact conscientiously and energetically carried out his archpastoral duties over the course of the next twenty years or so.

Although a Byzantine by upbringing and outlook, he was a true father and archpastor of the Bulgarian Church, defending its interests and protecting its independence and prerogatives. He was instrumental in the spread of Byzantine culture that took place among the Balkan Slavs in the following centuries. As a language scholar, he also aided the development of a native Bulgarian Orthodox Church and literature, especially by the use of Old Church Slavonic in Scriptural and liturgical texts. 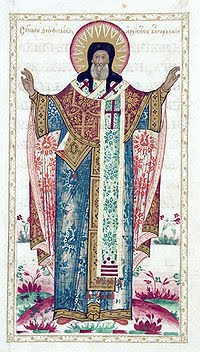 Countering the propaganda of the heretical Paulicians and Bogomils who were active in the region, he acted vigorously to protect his flock by ordaining dedicated and educated priests to teach Orthodoxy in the native Bulgarian language. He also showed his care for the Slavic people under his spiritual care by vigorously protesting the intolerable and extortionist demands of tax collectors sent from Constantinople.

He endured many slanderous accusations that were made against him both within the Diocese and in Constantinople, but he won the respect and love of the faithful who saw his tireless labors on their behalf. It is during this period of his life as Archbishop of Bulgaria that he wrote his Explanation of the New Testament, and of the Minor Prophets of the Old Testament. He did so at the request of the princess Maria—the mother of the imperial boy he had earlier tutored, and who had now become the abbess of a convent. His Letters also date to this time, as well as two other writings for which he is well known: The Life of St. Clement of Ochrid and a treatise entitled: The Errors of the Latins in Ecclesiastical Matters. 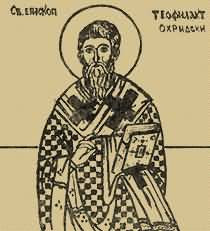 The latter two works highlight two developments of enormous consequence for the history of the Church. The first is the spread of Orthodoxy Christianity into the Slavic lands; for St.Clement of Ochrid was a disciple of Sts. Cyril and Methodius, and he brought to fruition in Bulgaria the labors begun by his mentors in carrying the Orthodox faith to the Slavs in their own languages. The second is the tragic schism which occurred between the eastern and western halves of the Church. Blessed Theophylact wrote his treatise, The Errors of the Latins, only some fifty years after the exchange of anathemas between Rome and Constantinople in 1054. While firmly defending the Orthodox doctrinal position rejecting the Filioque, Blessed Theophylact writes with a tone of moderation rare for his time, urging from both sides a spirit of conciliation concerning matters of local custom.