Metropolitan Jeremiah of Gortynia Takes On A Greek Secularist 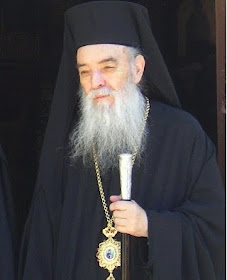 The video above features Metropolitan Jeremiah of Gortynia along with several local clergy at the swearing in ceremony on 19 December 2010 for the local mayor following his recent election into office. All officials in Greece are sworn in by bishops of the Greek Orthodox Church if invited to do so.

After a few words of blessing and advice for the new mayor, a secularist official, probably a communist, stands up and objects that clergy be allowed to bless the City Hall and swear in officials.

At this point the Metropolitan becomes enraged by the audicity of the man, saying things like:

"So are you saying we shouldn't have a Holy Water blessing service? You want to make our nation atheistic? Aren't you ashamed of yourself? Shame on you! Let me tell you, this is the land from where Gregory the 5th came from!... Get lost!... I believe in Christ and Country, this is why I tell him 'shame'!"

The Metropolitan then says that he is protesting the comment made and orders the clergy with him to leave if the law says so. The people then began shouting "No! No! Let him leave, not you!". The mayor intervenes and encourages him to stay. The Metropolitan then says that he will leave and like Gregory V will hang as well. He also says that when he was just ten days old his father was killed at 25-years-old in Albania by atheists like him.

Metropolitan Jeremiah then gives his last words: "Know that here you have a crazy bishop, a successor of Gregory V!"

In a later interview featured below, the Metropolitan said: "At that time I defended the rights of the Church, not myself personally. The gentleman spoke against the Church." In the first video below he is criticized by his interviewers for his hard stance, to which the bishop responded that he was invited by the mayor and he stood his ground. He then hangs up. In the second video the Metropolitan explains his offence at the remark made as not being personal, but he felt the Church was being betrayed and he had every right to respond. Criticized again for getting angry, the Metropolitan responds that Scripture says we should get angry when it comes to the Faith, "Be angry and sin not". He also says that it was clergy in their cassocks who got angry in the past with injustice, and this allowed the Greeks to rally against the Turks and atheists of the past. He then asks why the gentleman who questioned everything is not criticized for his rudeness, while he is being criticized for his rudeness. He thinks the gentleman should have been respectful of the fact that he was invited to the event, and if he had an objection to a clerical presence he should not have been there.