Saint Anysia the Virgin-Martyr of Thessaloniki

Anysia was born in Thessalonica of eminent and wealthy parents and was brought up in the Christian Faith. She was orphaned at an early age and gave herself completely to godly thoughts and prayer in her own home.

Fervent in her love for Christ, she often said: "Oh, how false is the life of youth, for you either scandalize or are scandalized. Better is old age; but sorrow overcomes me because of the length of time that separates me from heaven."

She sold all her possessions, distributed the proceeds to the poor, and lived from the labors of her own hands. She kept a strict fast, slept very little, and constantly shed tears at prayer. When sleep overcame her she would say to herself: "It is dangerous to sleep while my enemy keeps vigil."

At that time, the wicked Emperor Maximian issued a decree that anyone could kill Christians when and where he encountered them, without trial or sentence. This holy virgin once went out into the streets to attend church. That day was a pagan feast of the sun. A soldier saw her beautiful countenance, and he approached her with an impure desire, asking for her name. She made the sign of the Cross and said to him: "I am Christ's handmaid, and I am going to church." When the impudent soldier came closer and began to speak to her insanely, she shoved him away and spat in his face. The soldier struck her with his sword below the ribs and ran her through.

This holy virgin suffered in the year 298. She was honorably buried by Christians and was crowned with the wreath of glory by God in the Heavenly Kingdom. A church was built over her grave.*

* The relics of St. Anysia are contained on the left-hand side in the Church of St. Demetrios in Thessaloniki. 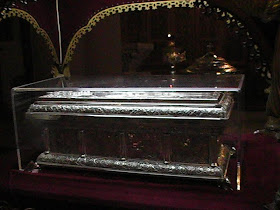 Holy Anysia prays to God,
Continually kneeling and shedding tears:
"O Jesus, God and Lord,
The Source of eternal life,
The Treasury of incorruptible goods:
Help me, O God, help me,
To remain a virgin until death,
As a virgin to enter into rest,
And to become worthy of Thy Kingdom.
Grant me, O Savior, Thy grace,
To be able to suffer for Thee,
To sacrifice myself for Thee.
I desire to be a sacrifice to my God -
Oh, help me to gain what I desire!"
God heard the virgin Anysia,
And gave her His grace
To be able to suffer for Him.
Holy Anysia, now in Paradise,
Shines as a star among the stars,
Shines as an angel among the angels,
Praying for us to the Immortal Christ. 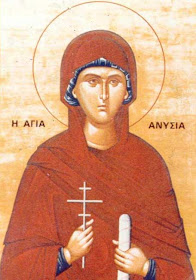 Apolytikion in the Fourth Tone
Your lamb Anysia calls out to You, O Jesus, in a loud voice: "I love You, my Bridegroom, and in seeking You I endure suffering. In baptism I was crucified so that I might reign in You, and I died so that I might live with You. Accept me as a pure sacrifice, for I have offered myself in love." Through her prayers save our souls, since You are merciful.

Kontakion in the Third Tone
As a doubly-shining lamp of truly mystical brightness do ye shine upon the Church like a high-towering beacon: thou with beams of martyr's glory, O Anysia; thou with rays of great ascetic deeds, O Melania. Now together ye are honoured by Christ your Bridegroom for your travails in His Name.
John at 12:43:00 PM
Share
‹
›
Home
View web version