The Miracle at the Virgin Mary Church in Maadi, Egypt in 1976

The site of the present Church of the Virgin Mary is closely associated with the Holy Family when they came to Egypt. After their short stay in Old Cairo, the Holy Family moved in a southerly direction, reaching the modern Cairo suburb of Maadi which, in earliest Pharaonic times was an outlying district of Memphis, the capital of Egypt then. At Maudi, they boarded a sailing-boat which carried them up the Nile towards southern Egypt. The historic church built upon the spot from which they embarked, also dedicated to the Virgin, is further identified by the denominative, 'Al-Adaweya’, the Virgin’s Church 'of the Fen y’. (In fact, the name of that now modem suburb, Maadi, derives from the Arabic word which means 'the Crossing Point’)

The stone steps leading down to the River’s bank, and believed to have been used by the Holy Family, are accessible to pilgrims through the Church courtyard.

An event of miraculous importance occurred on Friday the 3rd of the Coptic month of Baramhat - the 12th of March - in 1976. A Holy Bible of unknown origin was carried by the lapping ripples of the Nile to the bank below the Church. When found it was open to the page of Isaiah 19:25 in which is declared: "Blessed be Egypt My People". Inside their is an icon of the Holy Family as well as of the Nativity. There is also a map inside of the locations visited by the Holy Family in Egypt.

The Bible is now behind glass in the Sanctuary of the Virgin in the Church for all to see. 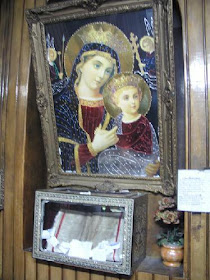 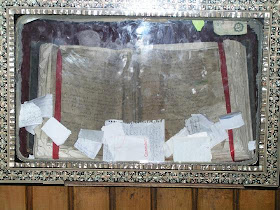 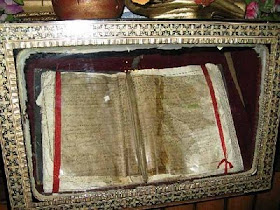