Holy Martyr Juliana and 630 Martyrs With Her 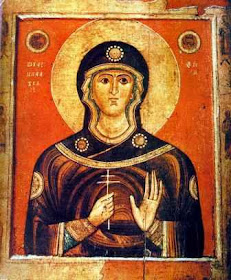 St. Juliana the Virgin-Martyr of Nicomedia and those with her (Feast Day - December 21)

By St. Nikolai Velimirovich
This glorious virgin and martyr was born in Nicomedia of pagan parents. Hearing the Gospel preached, she turned to Christ with all her heart and began to live in exact observance of the Lord's commandments.

Eleusius, a senator, was her betrothed. In order to turn him away, Juliana told him that she would marry him only if he became the eparch of that city. She suggested this to him, thinking that this young man would never attain such a high position. Nevertheless, Eleusius tried and, by flattery and bribery, attained the post of Eparch of Nicomedia. Juliana then revealed to him that she was a Christian and could not enter into marriage with him until he embraced her Faith, saying: "What does it benefit us to be united physically but divided spiritually?" Embittered by this, Eleusius denounced her to her father.

The enraged father scorned her, beat her, and then handed her over to the eparch for torture. The eparch ordered that they severely beat her, then she was cast into prison, all wounded and bloody. However, the Lord healed her in prison, and she appeared before the eparch completely well. He then threw her into a glowing furnace but the fire did not burn her. Seeing this miracle, many believed in Christ God. Five hundred men and one hundred and thirty women were converted. The eparch condemned them all to death and ordered them all to be beheaded. Thus their souls entered Paradise.

Then the wicked judge condemned holy Juliana to be beheaded. With a joyful spirit, Juliana went out to the place of execution, prayed to God on her knees, and placed her head on the block. Her head was severed and her soul went to the Kingdom of Christ's eternal light in the year 304. God's punishment quickly befell Eleusius: as he was sailing on the sea, his ship broke up and he fell into the water. He did not find death in the water, but swam to an island, where dogs tore him to pieces and devoured him.

A Reflection From Her Life

Whoever climbs to the Kingdom of Christ must encounter obstacles, and these obstacles are numerous and varied. Especially dangerous are the evils of the demons. Therefore, every man zealous for the spiritual life must be especially cautious and not accept every shining vision from the other world as a divine revelation. That even the devil is able to appear as an angel of light is shown in the life of the Holy Martyr Juliana.

When this holy virgin lay in prison, the devil appeared to her in angelic light, and he counseled her to offer sacrifice to the idols so as to end her tortures. The frightened Juliana asked: "Who are you?" The devil replied: "I am an angel of God! God is greatly concerned about you. Therefore, He sent me with the message that you should submit to the eparch, so that your body will not be destroyed by pain; the Lord is gracious and will forgive you because of the weakness of your wounded body."

The martyr was horrified at these words. Confused, she fell down in tears in prayer to God, asking Him to reveal who had spoken with her. Then a voice from heaven came to her: "Be brave, Juliana, I am with you; I give you authority and power over him who came to you, and from him alone will you discover who he is." And the devil was bound and forced to acknowledge that he was the same one who had deceived Eve in Paradise, who had told Cain to murder Abel, Herod to slaughter the children of Bethlehem, the Jews to stone Stephen, Nero to crucify Peter upside down and to behead Paul, and so forth.

Thus, this holy virgin, girded with the power of God, did not allow herself to be deluded by the evil spirit, but she defeated him by her vigilant and ardent prayers to God. 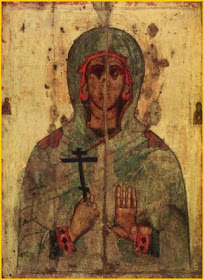 Apolytikion in the Fourth Tone
All-blameless bride and venerable trophy-bearer, you are wedded to the Word of the immortal Father, O glorious Juliana. For having wisely disdained your mortal bridegroom, you strove beyond nature to destroy the serpent, and now you delight in the joys of your Bridegroom!

Kontakion in the First Tone
A comely virgin wast thou, O wise Juliana; and as thy soul was wounded with love for thy Maker thy body was also pierced through with comely martyric wounds, which adorned thee as the bride of Christ and His Martyr; now as thou dost dwell in the bridechambers of Heaven, thou prayest for all of us.
John at 10:59:00 AM
Share
‹
›
Home
View web version