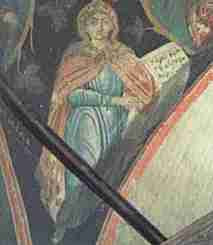 The word Sybil comes (via Latin) from the ancient Greek word sibylla, meaning prophetess. The Erythraean Sybil was the prophetess of classical antiquity presiding over the Apollonian oracle at Erythrae, a town in Ionia opposite Chios, which was built by Neleus, the son of Codrus. Many Church Fathers believed that she prophesied the coming of Christ through the acrostic ΙΗΣΟΥΣ ΧΡΕΙΣΤΟΣ ΘΕΟΥ ΥΙΟΣ ΣΩΤΗΡ ΣΤΑΥΡΟΣ or JESUS CHRIST GOD SON SAVIOR CROSS. The translation below of the Oration of Constantine from the 4th century is poetically formed to fit the original, but the original Greek can be read here and a more literal translation here.


By Saint Constantine the Great
My desire, however, is to derive even from foreign sources a testimony to the Divine nature of Christ. For on such testimony it is evident that even those who blaspheme his name must acknowledge that he is God, and the Son of God if indeed they will accredit the words of those whose sentiments coincided with their own.

The Erythræan Sybil, then, who herself assures us that she lived in the sixth generation after the flood, was a priestess of Apollo, who wore the sacred fillet in imitation of the God she served, who guarded also the tripod encompassed with the serpent's folds, and returned prophetic answers to those who approached her shrine; having been devoted by the folly of her parents to this service, a service productive of nothing good or noble, but only of indecent fury, such as we find recorded in the case of Daphne. On one occasion, however, having rushed into the sanctuary of her vain superstition, she became really filled with inspiration from above, and declared in prophetic verses the future purposes of God; plainly indicating the advent of Jesus by the initial letters of these verses, forming an acrostic in these words: Jesus Christ, Son of God, Saviour, Cross.

The verses themselves are as follows:

Judgment! Earth's oozing pores shall mark the day;
Earth's heavenly king his glories shall display:
Sovereign of all, exalted on his throne,
Unnumbered multitudes their God shall own;
Shall see their Judge, with mingled joy and fear,

Crowned with his saints, in human form appear.
How vain, while desolate earth's glories lie,
Riches, and pomp, and man's idolatry!
In that dread hour, when Nature's fiery doom
Startles the slumb'ring tenants of the tomb,
Trembling all flesh shall stand; each secret wile,

Sins long forgotten, thoughts of guilt and guile,
Open beneath God's searching light shall lie:
No refuge then, but hopeless agony.

God's arm shall crush each mountain's towering pride;
On ocean's plain no more shall navies ride.
Dried at the source, no river's rushing sound

Shall soothe, no fountain slake the parched ground.
Around, afar, shall roll the trumpet's blast,
Voice of wrath long delayed, revealed at last.
In speechless awe, while earth's foundations groan,
On judgment's seat earth's kings their God shall own.
Uplifted then, in majesty divine,
Radiant with light, behold Salvation's Sign!

Cross of that Lord, who, once for sinners given,
Reviled by man, now owned by earth and heaven,
O'er every land extends his iron sway.
Such is the name these mystic lines display;
Saviour, eternal king, who bears our sins away.

It is evident that the virgin uttered these verses under the influence of Divine inspiration. And I cannot but esteem her blessed, whom the Saviour thus selected to unfold his gracious purpose towards us. 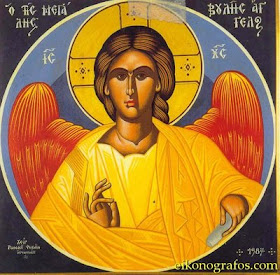 Many, however, who admit that the Erythræan Sybil was really a prophetess, yet refuse to credit this prediction, and imagine that some one professing our faith, and not unacquainted with the poetic art, was the composer of these verses. They hold, in short, that they are a forgery, and alleged to be the prophecies of the Sybil on the ground of their containing useful moral sentiments, tending to restrain licentiousness, and to lead man to a life of sobriety and decorum. Truth, however, in this case is evident, since the diligence of our countrymen has made a careful computation of the times; so that there is no room to suspect that this poem was composed after the advent and condemnation of Christ, or that the general report is false, that the verses were a prediction of the Sybil in an early age. For it is allowed that Cicero was acquainted with this poem, which he translated into the Latin tongue, and incorporated with his own works. This writer was put to death during the ascendancy of Antony, who in his turn was conquered by Augustus, whose reign lasted fifty-six years. Tiberius succeeded, in whose age it was that the Saviour's advent enlightened the world, the mystery of our most holy religion began to prevail, and as it were a new race of men commenced....

Source: Oration of Emperor Constantine to the Assembly of the Saints, Chs. 18 and 19.